Q: What did you do after graduation and what are you doing now?
A: After graduation I went to Rhode Island School of Design to pursue a MFA in Digital + Media. It was an amazing time with amazing people. While there I worked on everything from autonomous systems for propaganda to brainwave hardware interfaces. It was a completely natural transition from Stetson DIGA. Right now, I’m in Baton Rouge, LA teaching a class at LSU on interactive 3D media. I’m also collaborating on projects and writing proposals for new projects.

Q: Did you ever see yourself doing what you are doing now when you  took DIGA 101?
A: I hadn’t a clue what I wanted to be doing while taking DIGA 101. In a way that was kind of perfect. Learning about art and technology at the same time opened up so many possibilities at once. I’m realizing now that it has allowed me to create my own path in the “real world.”

Q: What advice do you have for someone taking DA101 right now?
A:It’s not a bad idea to learn a million things at once, but when you find something you like, try to engage it completely. Learn all you can about what excites you. Also, collaboration is key. You become eachother’s inspiration.

Q: What’s the best thing you learned studying Digital Arts @ Stetson?
A: To be mindful of the community around you – the immediate community of peers and critics and the larger community of role models and institutions.

Bonus Q: You went to Graduate School at RISD, one of the top art schools in the country, right after receiving your Bachelors from Stetson. How did your skill set compare to the other graduate students and how many were also straight out of undergrad?

A: There were three or four of us coming straight from undergraduate to RISD Digital+Media. Stetson’s undergraduate Digital Art program was surprisingly similar to RISD’s graduate program. I was extremely well prepared technically and conceptually. I’m beginning to realize there aren’t many undergraduate art programs as thorough as Stetson Digital Art. The way teachers became mentors at Stetson was awesome. It gave me confidence. It taught me how to use my teachers at RISD to the fullest potential. Many of the skill sets that I began to develop at Stetson I brought to grad school, giving me an initial leg up which carried over for the next two years. Now, I’ve been collaborating with classmates on projects because of the skills I initially developed at Stetson.” 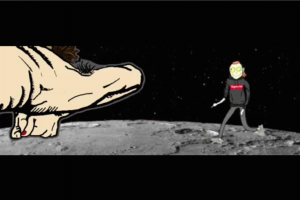 Last semester, Dr. Madison Creech's Digital Arts 101 class was tasked with a project. For three students, it led to succ...