Erin McCollum (2016) created a collection as part of her senior thesis in ARTS 499 taught by Gary Bolding. In her artist statement, she explains:

“In my mind, imperialism is a universal avarice.  This collection serves as an aesthetic reminder of the past, to reflect that such acts of greed are also rampant in our modern world.  The same outlandish misuse of power is still repeated for many of the exact same reasons: God, glory, and gold.  The fact of the matter is that the privileged have no right to establish lavish living over the backs and bones of other yielding, and in many cases, deceived human beings.  The unsustainability of this desire to dominate is my focus.
This notion is demonstrated by juxtaposing the extravagant and opulent lifestyle of aristocrats in the French pre-revolution era with the consequences of that regime.  These include the wrongful death, religious limitation, cultural depreciation and overshadowing of many indigenous populations that fell victim to imperialism.  However, I don’t seek to exclusively demonize or point fingers at the French absolute monarchy, but instead use this particular establishment as well as the corresponding Baroque and Rococo stylistic periods as a model.
However easy it is to feel remorse for those who have been neglected, one must also recognize the inherent dichotomy of power.  Imperialism is, and has always been, not only a play for dominance, but also an idea of humanitarianism. Figures we vilify now were once thought righteous and merciful for their contributions to those that were deemed “in need”.  It was just as much their duty and Manifest Destiny to spread religious deliverance and civilization as it was to spread their political influence. Average Americans live this every day.  One does not need to hold office in government, be a religious official, or even be insanely wealthy to engage in this system.  Imperialism is not something we can choose to avoid; like royalty, it is something into which we are born.  Sympathy therefore begs the question: Are the powerful to blame for misfortune, or are we all products of the struggle for power?” 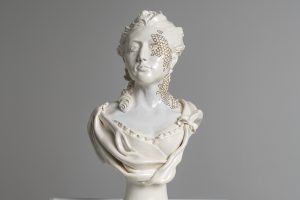 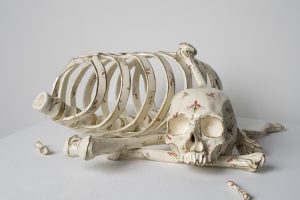 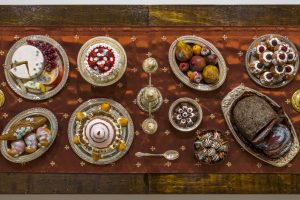 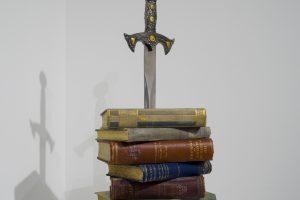 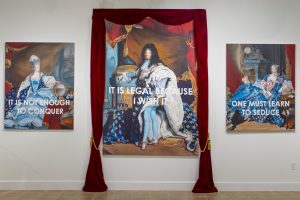 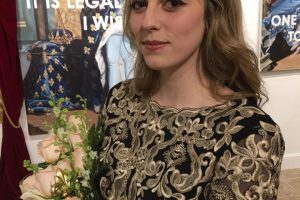 Erin McCollum at her senior show.