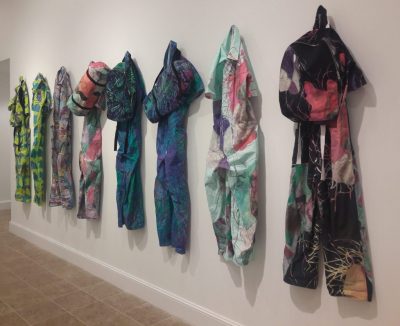 The project is a collaboration between the artists of the collective FEELD, including Madison Creech, Matthew Creech, Ola Lindefelt, and Wren Turco.
In this project, the artists focus on exercising resistance through the quiet productivity of foraging, and on showing a more sustainable and environmentally-beneficial way of consuming amidst widely unsustainable agricultural practices, by visibly targeting edible invasive species including the wild Loquat, Spanish Needle, and Winged Yam.

FEELD emphasizes visibility with the use of colorful jumpsuit outfits and bags on their excursions, funded by the Print All Over Me (PAOM) Endowment. The jumpsuits and bags are digitally-printed with custom designs inspired by the invasive species.
The exhibition will include the soiled jumpsuits and bags post-excursion, collected items and trash, and video recording of the foraging. Foraged items including the Spanish Needle and Winged Yam may also be on display alongside found objects.

Click here to visit FEELD’s shop on PAOM.
To learn more about FEELD and this project, continue reading below:

ANTIBODIES is a two-part exhibition produced by the FEELD collective. The first component is a participatory art experience piece, where members of the community are invited on a series of foraging excursions wearing PAOM field outfits. The second part of the project involves a display of the field outfits and equipment, along with yields and artifacts gathered, in a formal gallery setting.

The species selected for the project are Winged Yam (Dioscorea alata), Spanish Needle (Bidens alba) and wild Loquat (Eriobotrya japonica). The species were selected based on their prevalence, nutritional diversity and the substantial annual expenditures they represent in the tax-financed USDA eradication and control programs. The species have been featured in the design of the outfits and will be specifically targeted during the excursions. Spotted Tilapia (Cichlidae spp.) was also selected and may be sought out on request, but out of respect for all diets and beliefs, was not featured in the designs.

Centralized, fossil fuel-driven agriculture is one of the most consistent, widespread and destructive activities in the history of human civilization. “Organic” or not, it has ended the life of more organisms and laid waste to more natural territory than any other aspect of human existence. Foraging is a practice which directly, and drastically, counteracts this cycle, by promoting a move toward a localized resource economy existing within the boundaries of its own available means. Importantly, it does so without any act of aggression or confrontation, by simply promoting constructive, alternative strategies for survival.

As motifs, the selected plant species themselves constitute symbols of resistance by succeeding to thrive in environments far removed from their native ecosystems.

Perhaps most importantly, we, as participants in this project and practice, resist the ubiquitous, expensive and dysfunctional food and plant management systems appointed by government and corporate power, pointing forward toward greater community self-reliance, in the process making valuable grassroots efforts to rebalance* our native ecosystems.

ANTIBODIES was awarded the Print All Over Me (PAOM) Endowment. This fund supports artists and designers to pursue creative projects that push, expand, or ignore the boundaries between fashion, art and design. FEELD received custom digitally printed clothing to use in the completion of Antibodies. The fabric is printed to order, then cut and sewn. Working in the concept of slow fashion allows for high quality items to be produced in an environmentally sustainable way.

A guiding principle in the design process has been the concept of “anti-camouflage”. The majority of Florida’s large-body predators such as black bear, alligators, wild boar and variety of snakes only really represent a threat to humans if startled. Therefore, incorporating the intent to be noticed has been integral to the design of the PAOM field outfits.

This principle is equally important for dealing with the public. Communicating an intent to hide or blend in would raise suspicion from fellow citizens, landowners and law enforcement alike. We address this issue by clothing the practice of foraging as visibly, brazenly and recognizably as possible, thereby performing the work itself and propagating the conversation about its intention and necessity all in one unified gesture.