AUDITIONS for “Sticking it to the Man” 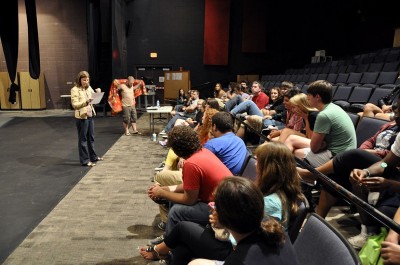 Auditions for Sticking it to the Man: Three Plays that Pushed Back will take place

This production features two guest artists, Paris Benjamin and Michael Taylor Gray, both professional actor/directors based in Los Angeles. They will also be giving workshops during the time they are here, so keep your eyes open for those.

There is also more than the usual call for an inclusive/diverse cast. Students of all ethnicities and genders are encouraged to audition.

Auditions are free and open to all Stetson students, faculty, and staff, as well as members of the community. You need not have a prepared monologue, although you may perform one if you wish. You may be asked to read from scripts and/or improvise some acting and movement. Wear comfortable clothes you can move in. You do not need to attend all audition sessions, unless you find it exciting to do so.

If you would like to audition but cannot make these times, please contact Dr. Ken McCoy at kmccoy(at)stetson(dot)edu

“Los Vendidos” by Luis Valdez is a sarcastic/sardonic/ironic comedy written in 1967 for the Mexican-American farm worker communities of southern California, but pertinent to latina/o and immigrant communities today. It features some spoken Spanish. Directed by Paris Benjamin.

“Dutchman” by Amiri Baraka (aka Leroi Jones) written in 1964, is a counter-punch from the African-American male identity in the face of white seduction, hypocrisy, and oppression. Directed by Michael Taylor Gray.

“The Well of Horniness” written by performance artist Holly Hughes in 1983 is a lesbian film noir fantasia that satirizes stereotypes and sexuality. Very LGBTQ friendly. Directed by Ken McCoy.