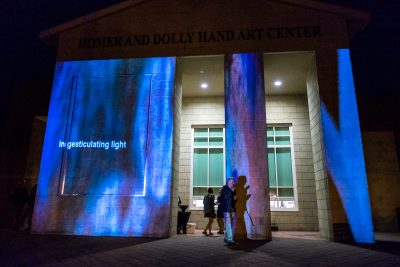 Right now at the Hand Art Center, a faculty feature on Matthew Roberts is on display. Roberts is an associate professor of digital art at Stetson University interested in working with emerging media.

Students, faculty, and members of the public community can now view Roberts’s Drift series. The physical representation of a walk along the beach. Roberts created the series by compiling images of sand from his own walks up and down the Canaveral National Seashore. These photos were fit into a collage to build what Roberts called “a poetic document of a work”. Over the collage of photos, Roberts inserted an “aesthetic choice of colors and shapes”. 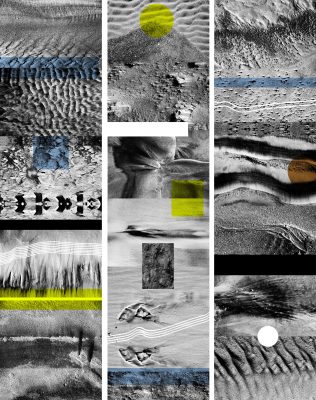 Why the Canaveral National Seashore? Or even, why the beach? Roberts says that as a surfer, he spends a lot of the time at the beach. The Canaveral National Seashore is unique as an “untouched portion” of Florida’s coast because it is protected by the National Park Service. Unlike New Smyrna beach, a popular destination nearby, Roberts noted that vehicles are not permitted at Canaveral. Therefore, he can capture the natural formation of dunes, lines made through the sand, and see what’s been washing up on shore.

Visitors of the Hand Art Center will find a video display playing over a small 3D installation next to the large prints of the Drift series. This 3D work of art is an example of photogrammetry. Roberts explained that by taking “as many photos as you can from a 360 degree perspective” a representation of that object can be created through a computer software into which the photos are loaded. Roberts used the software to create a beach dune. A projector shoots a video over the 3D dune. Roberts loaded thousands of photos into a computer program that works as a generative software that “keeps changing your pattern” to create the video. It “takes the average color, moves it around, blurs it”. Thus, the finished product is an abstract compilation of beach images projected over a three-dimensional sand dune. 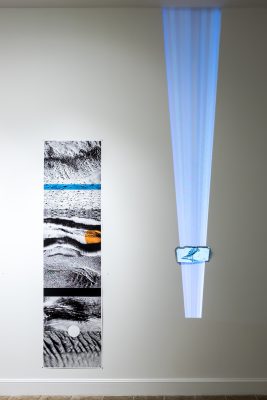 Here on campus, Matt Roberts is a professor trying to “keep abreast with what’s new”. That means “augmented reality, projection mapping, and new technologies for artistic expression”. Roberts has also worked in collaborative efforts inside and outside of the classroom, crossing disciplines. Swing by the Hand Art Center and experience Roberts’s walk on the beach for yourself. 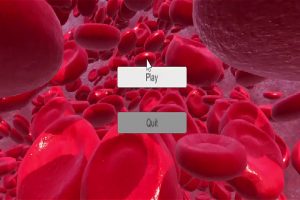 Every summer since 2016, Stetson has partnered with UCF's Florida Interactive Entertainment Academy to provide students ...