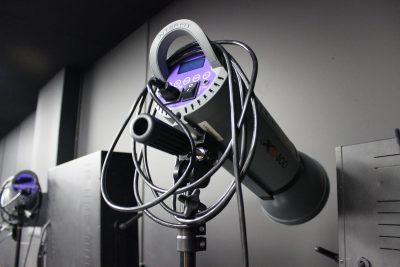 Maia Robbins, a sophomore Digital Arts major and Creative Writing minor, has a documentary currently on the Marineland Instagram and Facebook pages amassing more views every day. As part of a Digital Video Fundamentals class, Maia was assigned the task of creating a four-minute documentary about advocating for a change you want to see as a student. After thinking of causes that were important to her, she decided to center her documentary on beach trash.

Having grown up near the beach her whole life, Maia has memories of visiting her grandparents and going to Marineland, playing on the boardwalk and watching the dolphins. She remembers seeing beach trash and litter every time she went: “I can remember coming across so much beach trash, you know, throughout my entire childhood. I remember one time my family and I were on the beach and we found just a bunch of, I believe it was medical tubes that were just on the beach, in a bag or something. And it was so strange and very upsetting.”

To film the documentary, she interviewed her grandfather first, asking him about his experiences with beach trash. She then contacted Terran McGinnis, Marineland’s Facility Historian and Manager of Community Development, who was able to shed some light on beach trash and its negative effects on the environment. She expected to have to go to the beach twice to film enough beach trash, but only one day was enough to get her shots. Once she had all of her footage, she put it into Adobe Premiere Pro and figured out what she wanted to keep: “There were a lot of parts from both interviews with Tarran and my grandfather that I wanted to keep, but the limit was four minutes, I believe. And so I just needed to cut some things, but I’m happy with how it turned out.”

After she finished the project, Terran McGinnis contacted Maia asking for the documentary to post it: “I just went there to film her and ask her, you know, a few questions for the interview. And then when I was done, she asked if I could send it to her when I was finished…And I was completely surprised, but I was very, I was very happy. I was very excited because I had never had anything like that happen to me before.” She asked to be credited as a Stetson student, as it was a class project. The response has been great. Her friends and family reposted the video, and viewers have really responded to it, adding many views and likes.

Maia would love to create another documentary, but the future is completely open for her: “Being a digital arts major gives me so much room to explore different aspects that I had never really considered before,” she said. “Right now I’m in a graphic design class and I had never considered graphic design, but so far it’s been really interesting. And so I really, I don’t know. We’ll see what happens. It’ll definitely be something related to digital arts.”
You can view the documentary on Instagram or on Facebook.