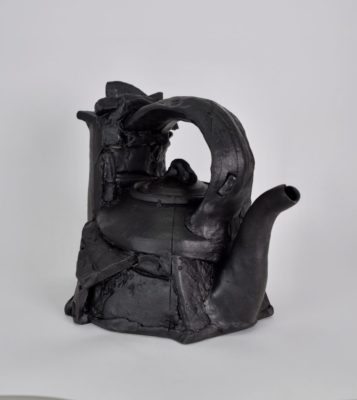 Ceramist and Professor Wesley Brown might have been conducting his January 27th demonstration and artist talk over Zoom, but the exciting and unexpected process of his ceramic work is anything if not fully immersive. With two different camera angles and a unique style of handbuilding, Brown walked attendees through the creation of one of his teapots.

Texture plays an integral role in the work of Wesley Brown. Starting with a large flattened piece of clay, Brown uses a steel rod, his knuckles, handprints, a roller, dried pieces of clay, sharpened clay tools, and bits of old clay crushed into dust (accompanied by a great Lion King reference: “I’m gonna pull a Lion King’s Rafiki and dust that on there, Simba”) to create all kinds of multilayered texture in his clay.

Ceramists use slip, a smooth mixture of clay and water, to help connect pieces of clay, and while Brown is no different, he uses a thicker, clumpier version to bind his work. He connects randomized geometric pieces cut out from his textured slab into an asymmetric base, and has a previously made wheel-spun piece of pottery ready that will make up the top of the teapot. Connecting the two is intricate work, involving cutting out parts of the top section to fit the uneven and jagged edges of the bottom. He uses newer pieces of his textured clay, slip, and rolled coils to fill in the empty sections and connect them. “It’s not scientific but it gives me some results,” Brown says, as he runs his wetted hands over his creation to find any leftover cracks he must fill. After creating a smooth, curved spout and a handle at the top that is designed to fit naturally into the user’s hand to the top of his teapot, Brown’s work is finished.

This artist talk comes as the first installment of the Dr. Charles White Speaker Series, founded by the Creative Arts Department Anti-Racism Committee for Equity (CREA-ACE), which aims to bring artists of color to Stetson to share their experiences and forms of artistic expression. Brown grew up going to predominantly white schools and living in predominantly white places. He had his first black teacher late into his schooling career and found himself unrepresented time and time again, a consistent minority in his surroundings. A trip to China introduced a different experience, as, while he may have still been a minority, all of the white students with him were minorities as well: “It was nice to be called ‘American’ and not ‘African-American’”. After this trip, he was confronted with the injustice he dealt with each day in America, and these emotions inspired his art as well as spurred much moving around and experimentation in his artistic expression and style. Finally, he realized he wanted to be in the studio and throw loose. “It was a way for me to loosen the control of what I was doing and in doing that I realized that the cyclical movement of the wheel was what I wanted to interrupt,” he said, “[I was] thinking about making things that were not predictable and not cyclical.”

After experimentation with textile and sculpture, creating pieces that were taken apart and put back together in more unpredictable ways, Brown ended up back in the ceramics studio with a newer perspective. He wanted to create pieces that were mixes of rough handbuilding and smoothened wheel-throwing. He looked to create “something that is simplistic at the top supported by something that is complicated, complex, a patchwork of many parts put together” to consolidate his dark experiences and complicated emotions with the simplicity of wanting to be accepted and accepting others in their fullness.

When asked about how he came to learn to trust his intuition in the ceramic process, Brown focused on the voice of his art and the purpose with which he makes his choices. He works to notice everything he is doing and every decision he is making, even if these actions are unconscious. He thinks about what it means for him and about him to make something, and focuses on the intention behind each decision. At the end of the day, for Brown, “It wasn’t so much that I needed to trust my intuition, it was that I needed to follow it, and give a verbal voice to it.”

Currently, Brown plans on continuing to teach and perform artist talks and demonstrations. You can follow him on Instagram at @wesbrowncreates for updates on his artistic process and photos of his work!