This page honors Dr. Irving Stover and the theatre program he helped build.

Although plays have been presented at Stetson University since 1896, the first regular and complete season took definite shape in 1906 in a program under the direction of Professor A.L.L. Suhrie. Since that time, and especially with the addition of Dr. Irving Stover to the faculty in 1908, over 700 productions have taken place, with student and sometimes community participation. These include several dozen Shakespeare productions, a significant number of original and/or presently unknown plays (including some by former Stetson President Lincoln Hulley), as well as other plays of more topical or educational interest.

Stover Theatre was completed in November 1930. Built at the persistent suggestion of Dr. Stover and through the fund-raising efforts of former Stetson president Dr. Hulley, it enjoyed a reputation as the first university building raised specifically for the purpose of theatre production in Florida, and possibly in the South. The building was originally known as the Little Theatre, and in 1938 was re-named after Dr. Irving Stover at the behest of his students, who passionately advocated the change in his honor. This was the first time a building at Stetson had been named for an active member of the faculty.

After 82 years of theatre production and after several renovations, the building was finally demolished in the summer of 2012 as part of the Campus Master Plan.

The legacy of Dr. Stover

Dr. Stover was a prominent figure in the educational theatre in the South, participating frequently in the Chautauqua circuit and maintaining active memberships in innumerable community, educational, and professional organizations. Among these, he helped found the National Theatre Honorary Theta Alpha Phi, as well as the Florida Speech Association (currently the Florida Communication Association). By all accounts, Dr. Stover was a much-beloved teacher and devoted to the advancement of the theatre profession. We continue to honor his legacy by example, through our academic program and production season, now taking place in the “Second Stage”facility in Deland’s Museum of Art on Woodland Blvd. across the street from the Stetson campus.

The Stetson library is currently cataloguing and digitally processing over one hundred years of photos, playbills, newspaper clippings, Theta Alpha Phi scrapbooks, and other original materials. These archive materials are being made accessible on the library’s online resources as they are processed. 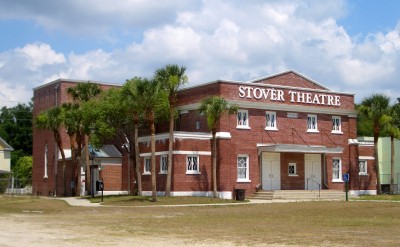