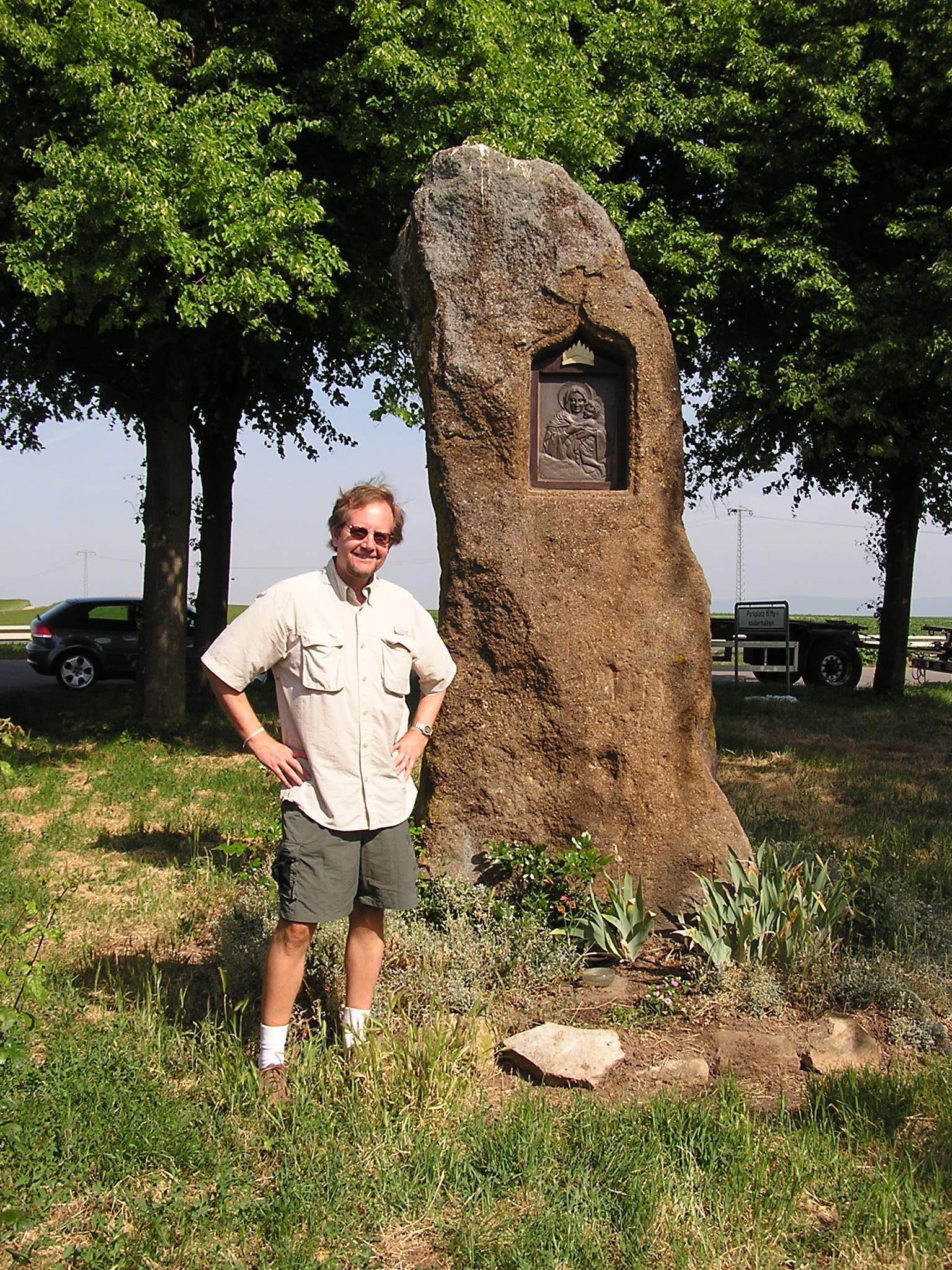 This 3.30 meter high standing stone sits in a small park next to the main road between Saulheim and Wörrstadt south of Frankfurt. On its eastern side, a bronze plaque of the Virgin and Child is installed in a niche. This is a good example of a megalithic monument being repurposed by a later religious culture. See the dolmen at Pavia in Portugal under Simple Dolmens for another example of this phenomenon.

Many local legends are told of this standing stone, popularly known as the “Devil’s Stone”. They often concern the devil and treasure.

In one a rich banker from Wörrstadt had amassed a fortune through crooked dealings. Day and night the usurer was plagued by the fear that his gold would be stolen from him, so he buried it in the field where the Langenstein now lies. The devil watched him and thought about how he might snare him in his sins. It occurred to him that the loss of his treasure would undoubtedly lead him to suicide, and so it did. The devil carried the piece of rock to the place where the gold was buried, and when the banker came and saw no means of removing the immense rock, he hung himself on a nearby tree. Since then, an owl or a dwarf sometimes sits on the stone at night and appears to guard the treasure.

In the uncertain period of the Napoleonic Wars from 1803-1815, when even buried goods were not safe from the plundering hands of soldiers, a Wörrstadt mother had the idea of ​​entrusting her savings to the hole in the Stone. When peace returned, the woman found her money again, undiscovered by the millions of soldiers who had passed by during the war years.

A tragic event occurred in 1883 related to the stone. The owner of the field where the stone sits set out to move it with a number of workers in tow. The stone had been dug loose on one side when it unexpectedly turned over and buried a twenty-two-year-old boy. The unfortunate man’s chest was shattered and he was instantly killed.

In the parish chronicle of Ober-Saulheim, Pastor Werner reported:

“The funeral that took place on December 23rd had attracted a crowd the likes of which the Ober-Saulheimer Gottesland has never seen before. The stone was smashed by visitors who poured in for weeks in order to get pieces. On the orders of the Oppenheim district office, the stone was placed in a wooden cover, which now looks like a coffin.”

In 1886 the stone was erected again and placed under monument protection.