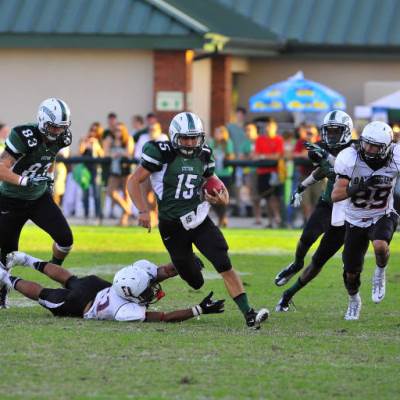 First Conference Victory – Hatter Ryan Tentler passed for 296 yards and rushed for 108 more to lead Stetson to a 26-13 Homecoming victory over Davidson before an overflow crowd of 6,544 on Saturday at Spec Martin Memorial Stadium. Check out this story and all Hatter sports at GoHatters.com. Photo by David S. Williams.

“Obviously I am very pleased with not only with us winning, but how we won,” said head coach Roger Hughes. “We got behind, we came back and we found a way. I told the kids this week that our motto is six for 60. Six full seconds every play for 60 full minutes and we did that today.”

Tentler was 24-of-31 passing, including a pair of touchdowns. He also rushed 17 times and scored once, on an 85-yard run late in the third quarter.

Overall, the Hatters collected a season-high 520 total yards on offense. Stetson rushed for 224 yards, getting 4.8 yards per carry for the game.

“We have the athletes to do this all year, it’s just we are slowly getting to where we are supposed to be,” said Tentler. “When we actually do things that we practice this is the result. We could have scored more points tonight. We had 26 points but we should have had 50.”

After a scoreless first quarter, Davidson opened the scoring when David Rogers broke free for a 49-yard touchdown run with 4:07 left before halftime. The Wildcats failed on a two-point conversion and led 6-0.

James LaGamma kicked a 40-yard field goal with 10 seconds left in the half to get Stetson on the board. Davidson led 6-3 at halftime.

Stetson opened the scoring in the second half when Tentler connected with Austin Marks on a 15-yard touchdown pass with 9:53 left in the third quarter. The two point conversion failed and Stetson led, 9-6.

Two possessions later, Stetson faced a first-and-10 at its own 15. Tentler kept it and ran around the left end for 85 yards and a score, the longest play from scrimmage this season for the Hatters. The extra point was good and Stetson led 16-6 with 1:43 left in the quarter.

But for the second week in a row, Stetson’s kick coverage team had a let down following a Hatter score. Following Tentler’s run, Davidson’s Garret Diehl took the kickoff 92 yards for a touchdown, cutting the lead to 16-13 with 1:28 left in the third.

But the Wildcats never threatened again.

After the teams traded punts, Tentler marched the Hatters down the field again with a pair of long passes. On first and 10 from the Stetson 37, Tentler connected with Terrance Burt on a 41 yard completion, and on the next play found Darius Chapes wide open in the front corner of the end zone. The extra point gave Stetson a 23-13 lead with 10:06 left in the game.

LaGamma capped the scoring with a 25-yard field goal with 3:39 to play.

While Stetson’s offense was piling up the yards, the Hatter defense was holding Davidson in check. The Wildcats gained just 286 total yards and quarterback Jonathan Carkhuff was harassed all day. Carkhuff completed just nine of his 27 pass attempts for 164 yards and was sacked four times, a season-high for the Stetson defense. Donald Payne (2.5) and Dave Lazear (1.5) combined on the sack total.

“I thought our defense played extremely well and we basically shut them down with the exception of a couple drives,” said Hughes.

Payne led the defense with 10 tackles, while also breaking up a potential scoring pass on fourth down midway through the first quarter. Ryan Powers and Davion Belk each had six tackles.

Tentler spread the ball around, completing passes to 11 different receivers. Darius McGriff led the way with five receptions for 66 yards, while Mike Yonker had four catches for 75 yards. Chapes had three catches for 32 yards and a score, while Austin Marks, Nick Lasala, Chris Crawford, and Jerami Singleton each had two receptions.

TEAM NOTES
–Stetson secured its first Pioneer Football League victory of the season.
–The Hatters were a perfect 4-4 in fourth down conversions, while Davidson went 0-3.
–Stetson converted on 24 first downs during the contest while Davidson managed just 10.
–The Hatters controlled the ball for a total of 38 minutes and eight seconds, compared to the Wildcats 21:52 of possession.
–SU compiled 520 total yards of offense, marking the fifth time this season it has racked up at least 300 and the first time it has surpassed the 400-yard plateau.
–Stetson recorded at least three sacks in a contest for the fourth time this season and for the second straight week.