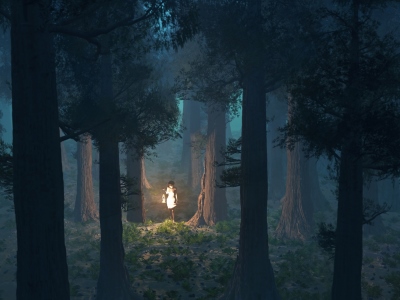 The following is the first in a series of in-depth articles about Stetson University’s values-filled journey, covered in the new Summer 2014 issue of Stetson Magazine:

When you come to a fork in the road, take it.

And that’s what happens when we don’t reflect about our deepest held values. As Law Professor Michael Allen, J.D., asserts: “When you come to an intersection, you’re making a choice. You can turn left or you can turn right or even go straight. It’s important to recognize that we make choices all the time. People need to ask themselves if the choices they make are the right ones. If they don’t ask the question, they may never know.”

The quest to understand our values, then, is a labyrinthine journey filled with sharp turns and unexpected forks in the road. Our choices are rarely black and white but shades of gray. In fact, values are complex things that often reflect emotion, especially in the realms of spirituality and politics. In our search for objective truth, the values road can have emotional potholes. Can we hold values without putting them up to the light of truth?

As Plato quotes Socrates: “The unexamined life isn’t worth living.”

Stetson’s own values-filled journey defines its character. The pitfalls are many. When the university holds values, such as gender equity and a sustainable Earthly environment, does it mean that it must inculcate these ideas into those within its community? This is a question explored and debated since the early days of Stetson’s Values Council.

To be clear, most every organization and many universities and colleges have a set of values they tout and attempt to hold onto. For example, Apple Computer’s values: “We build products that extend human capability, freeing people from drudgery and helping them achieve more than they could alone. But beyond that, we expect to make this world a better place to live. As a corporate citizen, we wish to be an economic, intellectual, and social asset in communities where we operate.

Google’s values statement is even simpler: “You can make money without doing evil.”

What are values, and how do you differentiate them from ethics? Quite simply, values are ideas and things you care about. They help guide you through the labyrinth of right and wrong. Ethics are the rules groups develop for their members to keep them on the right path or, if not, to suffer banishment. Doctors and lawyers, for example, have codes of ethics.

And that’s the question. When a university or college adopts values, is it seeking to say to its community, “This is what you must believe?” Of all places, this values issue came up in a strategic planning discussion with a large group from the Stetson community.

One of those participants suggested that the university’s core theme should clearly state: “Establish Stetson as the university of choice for values-based solutions to complex challenges.”

But then someone else at the meeting challenged that statement as being too religious. “It makes Stetson sound less inclusive,” he declared. “I’m Jewish, and it makes it sound like I don’t belong here.”

I puzzled over that remark. After all, Stetson’s core values are clearly stated on its website. Values seem to spread throughout the place. I chimed in: “Couldn’t this also mean our Judeo-Christian values?”

Yet, maybe I wasn’t looking at the word from that person’s perspective. For example, it’s customary to find a faith-based university’s mission embodying an “education for values.” However, can a nonsectarian university, such as Stetson, say the same thing?

And does the word smack of indoctrination or inculcation of certain values? For instance, we talk about family values, but what exactly does that mean? Do we mean that a family should be made up only of a man and woman and their children, or could it mean something else quite different, maybe a loving couple of the same sex?

In other words, whose values are we talking about here? Why should one word that seems to be something to rally a community behind become something that instead splits that community apart?

I put the question to Allen: “Words have meaning and connotations,” he says. “In the political world in which we live, ‘values-based’ can be equated with certain far-right expressions.”

Allen says these are more pluralistic rather than “narrow.” “The value of being a champion for the poor or the value of capitalism,” he adds, “are all worthy explorations for a university.”

This kind of approach, according to Allen, “allows students to be free thinkers and problem solvers.” In his constitutional law class, for instance, Allen notes that the students reviewed the case of Westboro Baptist Church members. These church members would protest at soldiers’ funerals because they believed the U.S. stance on same-sex marriage caused God to take these servicemen’s and women’s lives.

“It went all the way to the U.S. Supreme Court, and the court upheld their right to protest at soldiers’ funerals,” Allen says. “In the court’s ruling, Chief Justice John G. Roberts Jr. recognized that these were hurtful actions. However, he said that the Westboro parishioners had the right of freedom of expression that’s protected by the First Amendment.

“That’s the question I want students to recognize when we review cases like this one,” he explains. “They need to think about laws as embodying values, but at the same time, they need to understand that the law may sometimes go against their personal ones.”

Furthermore, no one interviewed for this article believes Stetson students are indoctrinated into its values. “On the contrary,” says Spanish Professor and the Values Steering Team Leader Robert Sitler, Ph.D., “we’re encouraging individuals to explore these values with us and to think about what they really do value. Our values help us orient our thinking so we can encourage people to explore what they believe is important themselves.”

Sitler gives religion as an example: “There is nobody pushing any particular religious ideology on our campus. I don’t think there is anybody pushing anything on anybody as far as I can see.” Yet, the question about indoctrination is a legitimate one.