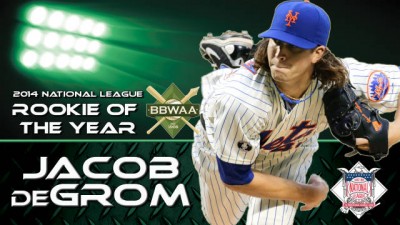 deGrom, who played at Stetson from 2008-10, finished his rookie season in New York with a 9-6 record and a 2.69 ERA in 140.1 innings of work. He recorded 144 strikeouts, including tying the MLB record with eight consecutive strikeouts to start a game against Miami.

deGrom, who was selected by the Mets in the ninth round of the 2010 draft, was twice named NL Rookie of the Month (July and September) this season. He also earned an NL Player of the Week honor in July, sharing the award with Marlins close Steve Cishek.

deGrom received 26 of 30 first place votes. His 142 points were 50 more than Billy Hamilton of the Cincinnati Reds, who finished second.