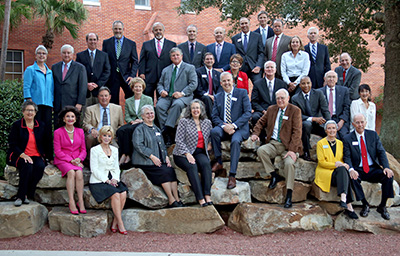 Stetson University’s Board of Trustees, pictured, approved a change in the university’s investment policy in alignment with the University’s recent decision to become a tobacco and smoke free campus. The University will no longer directly invest in tobacco company securities.

“This decision is an outgrowth of Stetson’s commitment to its values,” said Stetson Vice President and CFO Bob Huth. “By choosing to restrict investment of certain university funds, we are putting our values into action, which is an important component to the full Stetson experience.”

The Board reviewed and approved the fifteen-year campus plans for Stetson’s four campuses recommended by the university’s Facilities Committee. The plans identify various facility projects to be undertaken in the near and mid-term.

WORLD: The David and Leighan Rinker Center for International Learning has been endowed by Stetson University Trustees David and Leighan Rinker. The dedication ceremony was held to honor them and their family’s long-standing investment in Stetson’s future. While Stetson’s recruitment of international students and the study abroad programs are most well-known, the newly endowed WORLD (World Outreach, Research, Learning and Development) Center seeks to recognize, connect, increase and support the other ways in which Stetson University is able to internationalize the institution and gain global recognition.

The Hollis Family Student Success Center, the latest endeavor in a long history of support and service of Stetson by the Hollis family, will be the hub of learning in the heart of the Stetson campus. The Center will allow the various functions of Stetson’s Student Success program into one high-visibility, high-traffic location: Stetson’s duPont-Ball Library, on the second (mezzanine) level. It will focus on empowering students with the academic, social and financial know-how to succeed and to live a life of significance.

The Trustees received information on Title lX and participated in an information session about what the university has done and continues to do to be compliant with the requirements of Title IX, with the focus on ensuring a safe environment for faculty, staff and students. Leading the discussion was a panel of experts, including Stetson’s General Counsel Mark Alexander, Partner, Alexander DeGance Barnett; Professor of Law Peter Lake, who serves as Director of the Center for Excellence in Higher Education Law and Policy; and Douglas Onley, Senior Claims Counsel, United Educators.