New Bookstore in CUB, Other Changes Readied by Construction Manager

When Stetson students return in August, they will find a remodeled and expanded Bookstore, Post Office and convenience store in the Carlton Union Building, and a few temporary changes in the Commons Dining Hall.

The CUB is undergoing a $30 million renovation and expansion through 2018 that will enlarge and update the dining hall and kitchen, add meeting rooms and a lounge for students, and provide new offices for student groups and student services.

The construction manager has completed a building behind the CUB that will house a temporary kitchen through fall of 2018 while a new kitchen and dining room are under construction inside the CUB, said Al Allen, associate vice president for Facilities Management at Stetson. The temporary kitchen is a fully operational industrial kitchen that maintains strict food safety and sanitation requirements while providing the same variety of food options.

In the coming year, meals will be prepared in the temporary kitchen and served in the area that once housed the coffee shop. Students will eat their meals in the Commons dining room or in the Community Lounge across the hall, where they will find more tables and chairs, Allen said.

On Tuesday, June 13, the Stetson Dining staff started serving meals from the temporary serving area, said Lindsey Bishop, Director of Marketing & Guest Experience for Stetson Dining. The Dining staff will be able to train this summer while feeding those attending Stetson’s summer camps, giving the staff plenty of practice before students return in mid-August.

Also new for the fall semester, students will find a Food Truck operated by Stetson Dining in front of Chaudoin Hall, across from the CUB. “We are going to work with the Student Government Association on food and beverage ideas for the menu,” Bishop added.

When students return for fall classes, they will get their first look inside some of the CUB improvements. The remodeled and expanded Bookstore will open and be about 25 percent larger in the North Wing, which has been renovated and expanded, Allen said. The bookstore will be connected to a convenience store, copy center and the campus Post Office on the wing’s first floor.

Workers were busy last week, polishing concrete floors, and will install the carpet and make other finishing touches in coming weeks, he said.

Students will enter the bookstore through a new north lobby that features a grand staircase to the wing’s second floor. The second floor will open by January 2018, as soon as the elevators are installed to provide handicap accessibility.

“We’ve never had a north lobby before,” said Allen. “The north lobby will be equally grand as the new south lobby.”

The second floor will house offices for student groups and services, including the Student Government Association, the online radio station, WHAT, the Office of Diversity and Inclusion, and the Center for Community Engagement, as well as a student lounge. (The Cross Cultural Center will not move into the CUB and will remain in a separate house for students to use.) The new student offices and meeting areas in the CUB will feature many glass walls, giving the second floor an open design and natural light from the palladium windows along the exterior of the north wing.

“We have increased the amount of student space in the building significantly,” Allen said. “The architects have designed beautiful spaces for our students in terms of giving them light, glass doors and glass for their offices.”

When the project is completed in January 2019, the CUB also will have a renovated South Wing with a coffee shop and faculty lounge. The Stetson Room will see changes, too, including the addition of a corridor running along its east side with a series of glass doors leading inside.

When the bookstore and post office move into the CUB, Griffith Hall will be renovated for use by the Student Health Center, Student Counseling and the Office of the Chaplin/Religious and Spiritual Life. The relocation of most of these functions will occur during winter break of 2017. That will free up two buildings on Bert Fish Drive, which then will become the temporary home for the offices for Campus Life and Student Success, including Lua Hancock, Vice President for Campus Life and Student Success, during the renovation of their offices on the second floor of the CUB.

The changes come 60 years after the CUB opened in the fall semester of 1957 at a cost of $1,250,000, according to The Stetson Reporter on Aug. 30, 1957. The building was dedicated in 1958 and named after Doyle E. Carlton, the governor of Florida from 1929 to 1933, who graduated from Stetson and served as a trustee, according to records and photographs in the Stetson University Archives. 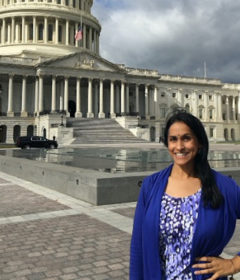 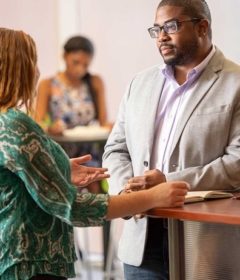