Former pro football star Tra Thomas almost gave up on his dream to play the sport beyond his days at DeLand High School.

“At Florida State University, I sat on the bench for four years,” Thomas told the 520 attendees at the DeLand MLK Celebration’s breakfast on Monday, an annual event hosted by Stetson University in the Rinker Field House.

The celebration, which included the breakfast and a march from the campus southward on Woodland Boulevard to a festival at Earl Brown Park, honored the legacy of Dr. Martin Luther King Jr.

“It was tough to sit on the bench and I was frustrated,” Thomas, the keynote speaker at the breakfast, said as he spoke into a wireless microphone and meandered among the guests. “I called my dad one time and I said, ‘Dad, I’m going to quit.’ My dad was like, ‘Ahhhh . . . we expanded our bedroom so your bedroom is gone, so you can’t come home.’

“You always have two choices in your life — you either get up and push through it or . . . ,” Thomas continued as his voice choked and tears welled up in his eyes for almost a full minute, while the audience bolstered him with verbal encouragement.

Thomas, who noted he took swimming lessons and attended basketball camp at Stetson as a youngster, made his point without talking about that second choice. Instead, with his wife, children, parents, Stetson faculty, staff and students, area dignitaries, personnel from Volusia County schools, and his fellow hometown citizens in the audience, he related how he played his final year at FSU, then played 11 seasons for the Philadelphia Eagles, where he made All-Pro one year and played in the Pro Bowl three times.

“One of the things I learned in life is to know what is your most valuable asset, and your most valuable asset is your time,” Thomas said. “Look at Martin Luther King’s life and all that he did in the 39 years he was on this earth. Now that’s taking advantage of your time. Always, always, always take advantage of the time you have, because once the clock hits zero, that’s it.”

Jaden Brown, a 10th-grade student at DeLand High School, electrified the crowd and drew them to their feet when he related key moments in King’s life, then recited a portion of his “I Have a Dream Speech:” “I have a dream that my four little children will one day live in a nation where they will not be judged by the color of their skin, but by the content of their character.”

Thomas subtly referenced King’s words when he related a second lesson he had learned: “A lot of people are extremely talented, but sometimes your talent will take you where your character won’t keep you.

“A third thing I learned is: If you devote yourself to an ideal, if they can’t stop you, you can become something so much greater. Know what that is? A legend. Where have you heard that before? It’s Batman — the Dark Knight! [Ed. note: from the movie ‘Batman Begins’]. That’s true of anything that you do. Don’t ever let anybody stop you.”

Patrick Coggins, PhD, JD, professor of Education, and organizer of the Stetson MLK breakfast for the past 10 years, said after the breakfast that he is “concerned about the need for us to involve our young people.” The event is a way “to make sure that any Stetson student, any student in the community could come and have a free breakfast and interact with other young people and hear from Tra Thomas, who came up in this community, working class and not rich, but went to school, got an education and made a difference in his life.”

Coggins added he also is “concerned about the regression that has occurred nationally, that has occurred in the state of Florida, and it’s even occurring on campuses. I’m spending more energy trying to let people understand that in the ’60s Dr. King moved us closer together, black and white, Hispanic, Latino and the European community, and that we cannot afford to go backwards.”

Coggins mentioned the 1963 bombing of an African-American church in Birmingham by white supremacists that killed four black girls, then added, “My sense of urgency is that this extremist behavior is now coming into the churches, and not just the black church. We’ve seen it in the Jews’ synagogues. We’ve seen it other denominations — in Texas. We don’t need to go back to hate. What we need is to care about each other and make this country great again – not for hate but for love and the collective energy that Dr. King put together.”

He also praised Libby, who is serving her last semester as president before her retirement, for her role in the annual breakfast: “It used to be maybe 200, 300 people would come. Now, today we served 520 plates. She has elevated this celebration during her 10 years to a signature event, not just for Stetson University but for the entire community.”

The breakfast also included an audience-wide singing of “Lift Every Voice and Sing,” a 1905 song that became known as the “Negro national anthem,” and “We Shall Overcome,” a key anthem of the Civil Rights Movement.

The breakfast also included various awards and recognitions of area community and civic leaders, and were presented by the Rev. Larry Chavers and Althea Chavers, and Mario Davis, a member of the DeLand MLK Celebration committee and executive director of the Greater Union Life Center, a DeLand-based, nonprofit community service organization. 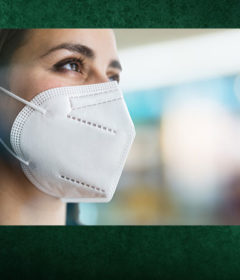 Coronaviruses and the Science of Spillover Diseases from Animals