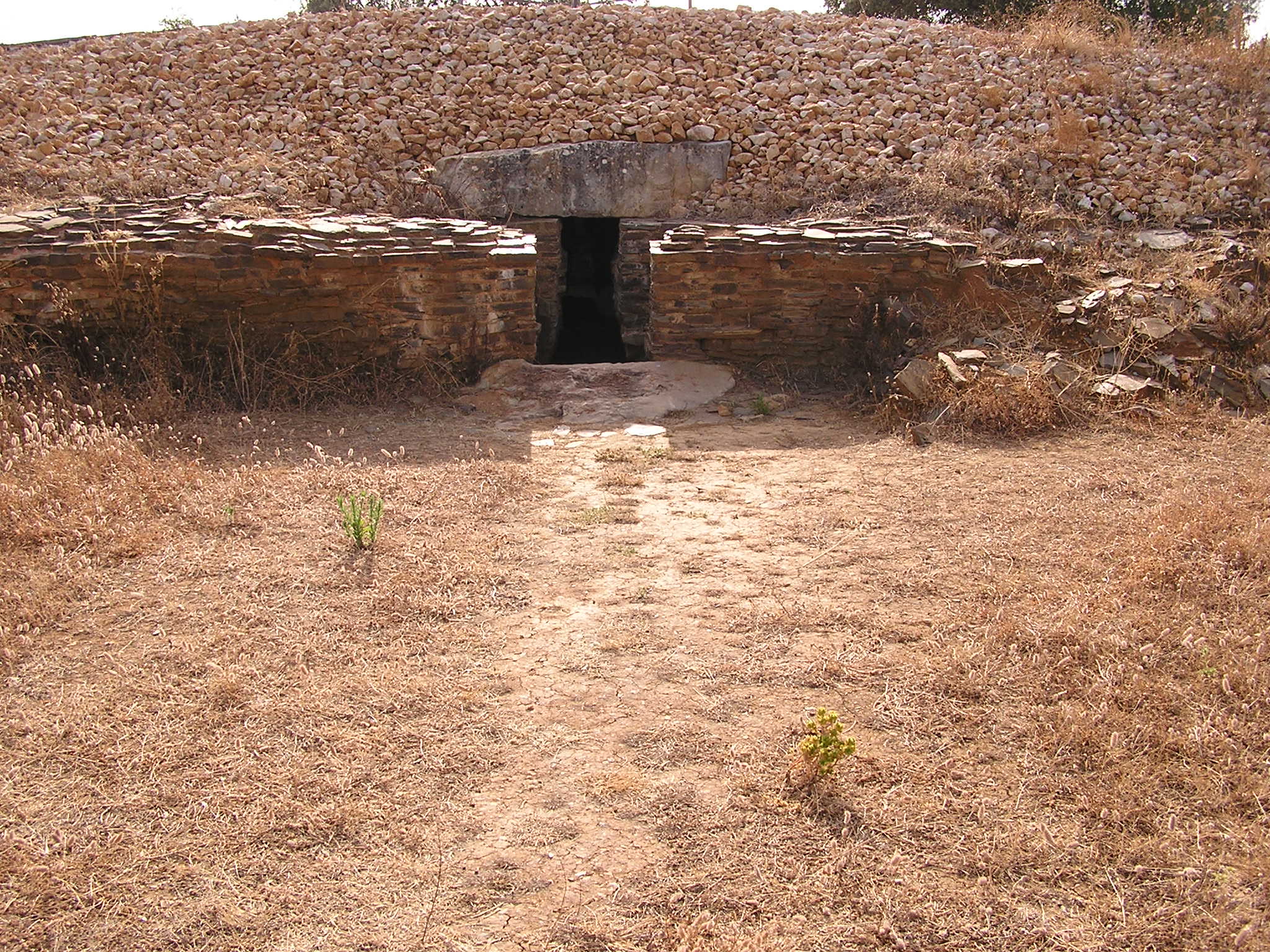 The Alcalar necropolis is the most significant Neolithic site in the Algarve region of Southern Portugal and well earns its designation as a National Monument (June 16, 1910). The massive cairn at the center of the complex, Monument 7 (of 17 total) is the most impressive of the megalithic structures found there. The site complex has an excellent Reception and Study center that provides information on such themes as the human occupation of the site, art and architecture, funeral rites and religious practices, daily life, and technology. On any visit to Portugal or southern Spain, this site is essential for those interested in western European megaliths.

The Alcalar necropolis was part of a larger social and cultural development in the southern Iberian Peninsula that occurred around 3000 bce. It was during this period that fortified settlements were built that stretched from Los Millares (Almería) to Valencina de la Concepción (Seville) in Spain and from Alcalar to Leceia in Portugal. These settlements show evidence of copper metallurgy, the so-called  “Copper Age,” a hierarchical social organization (finds of gold and ivory, and sumptuously furnished necropolises), and a pristine form of state-organized polity. In the mid 3rd millennium bce, a cultural form commonly referred to today as the “Bell Beaker phenomenon” emerged in the estuary zones of the major rivers of this region. This culture subsequently spread throughout western Europe.

Alcalar itself is situated between the coastline of the Alvor inlet and the foothills of the Monchique mountain range to the north. This area is at the center of the Algarve’s barrocal, or limestone coastal strip. The settlement of which Alcalar was a part measured over ten hectares and was located on a hillock at the terminus of the once-navigable Torre River. In the immediate environs of Alcalar were other settlement sites and 18 megalithic tombs constructed in a wide range of architectural styles. These styles developed over time and include a tholos—a crypt with a false dome similar to sites in Mycenae, dolmens using massive slabs of sandstone, and chambers carved into rock for collective burials.

The site was ideal for human habitation because the area provided abundant game, fish, and shellfish in the inlet and river systems, various raw materials such as sandstone, limestone, schist, and wood for buildings, and plentiful water-based resources (fresh water included) that supported irrigation for cereal and vegetable production. The main sources of water were springs and the Arão, Farelo, and Torre Rivers, which also provided avenues of transportation for peoples and goods. A variety of artifacts have been found at Alcalar that range from flint to rolled greywacke and metal. Copper was mined in small iron-hat mines in the hinterland’s schist strip, and gold was collected in the area’s riverbeds.

The many dolmens and passage tombs at Alcalar indicates a conscious concern with death, as well as the likelihood of rituals during the equinoxes and solstices to venerate and remember ancestors. The size and sophistication of Monument 7 is evidence that elite members of the tribe received special funerary rites and honors, a development that parallels that of the early Egyptian dynasties of the same period.

Archaeologists Nunes da Glória, Estácio da Veiga, Pereira Jardim, Santos Rocha, and José Formosinho first excavated Alcalar beginning in 1880. Recent excavations have been carried out under the supervision of Rui Parreira and Elena Moran, with support from the Portuguese Institute of Architectural Heritage (IPPAR). Their research project is called “Alcalar: Study, Protection, Upgrading and Academic Divulgation of a Cultural Landscape from the third millennium bc” and is part of the National Plan for Archaeological Work (PNTA 2002-225).

Evidence uncovered during the various excavations—including traces of leveling work and ritual hearths–have revealed that Monument 7 was built over previously consecrated space. Most of the finds from these excavations can be found at the National Archaeological Museum (Lisbon), the Dr. Santos Rocha Museum (Figueira da Foz), the Lagos Regional Museum, and the Portimão Municipal Museum. The archaeological work at Alcalar has included extensive restoration of Monument 7 and geophysical prospecting at Monument 15.

A Reception and Study Center opened in 2000 to protect the main site from further degradation and to support educational visits and archaeological work. The center has a gift shop, informational brochures, and is thematically organized for visits to each monument in the complex. It is surrounded by a high metal-link fence, making entry to the site only possible during center opening hours.

Archaeological excavations began at Monument 9, located a few meters from Monument 7, in 1900. This work uncovered a funerary structure that featured a circular crypt and a short access corridor. The monument was constructed using schist. The monument is presently in a state of ruin and needs extensive reconstruction. Monuments 1-4 are located on state-owned property and accessible to visitors. The remaining necropolises are located on private property and require prior agreement from the respective landowners.

Monument 7 is a sophisticated passage tomb constructed as a large mound of dry-stones covering a corbelled, circular crypt that lies at the geometrical center of the cairn. This particular type of crypt chamber is termed a tholos and is distinctive in its bee-hive shape and careful corbelling. At the top of the corbelled chamber was a “key-stone,” which, prior to excavation and restoration, had broken in two under the weight of the dry-stone mound above it. Today, the visitor can look down into the central chamber through a kind of oculus, or eye, the key-stone having been removed. The floor of the crypt consists of a large limestone slab and several smaller stones. Two niches with large capstones and door-stones radiate out to the north and south from the center of the crypt. The niches likely held human burials with accompanying grave goods and adornments. At the west end of the crypt is a smaller niche that had no door-stone but did have several covering slabs. This niche shows evidence of use as a liturgical fire ritual space. Following the collapse of the roof, this niche was sealed off. The original shape of the passage, crypt, and niches uncannily resembles a Catholic monstrance, a receptacle made of precious metals that houses the consecrated Host and is used to expose the Body of Christ for adoration by the faithful.

The cairn is surrounded by a low wall of small schist slabs that is wide enough to serve as a kind of walkway around the circumference of the monument. This wall is now beautifully restored. The passageway into the crypt begins at the east end of the site and consists of a tiny patio at the entrance and a narrow entryway covered by a huge capstone (reminiscent of the capstones at Gavrinis and Loquimarer in Brittany). The dry-stone passage itself has a unique structure: it is divided into three sections that narrow as one approaches the crypt and are delineated by three limestone caps surmounted on vertical upright stones. This triple division is reminiscent of the tombs found at Los Millares near Almeria, Spain, and in certain Sardinian passage tombs. Passage through this corridor would be very difficult for a normal size adult, and entry into the crypt would necessitate going on hands and feet. The entire site, which measures about 27 meters in diameter, is framed by two menhirs/steles, one to the south of the cairn, and the other located in a liturgical space opposite the entry façade. Like all passage tombs in this part of Portugal, this one is oriented east, 99 degrees. This monument was clearly the most significant of the many tombs in the area and was likely used for funerary rites that included the entire local population.

How to get there:

This site is fairly easy to find. As you leave Portimão on the EN 125 heading west to Lagos, take a right turn at the Alvor junction (north) (Alvor itself is south). On reaching Penina, take the road to Senhora do Verde /Alcalar. After about 4 km, signs point to the necropolis. It is just off the main road on a little road heading east. There is a carpark for passenger vehicles and coaches. Make sure you have the schedule of opening and closing times and dates. Buses are available from Portimão-Montes de Cima.

Easy access for visitors with restricted mobility to the Reception and Study Centre and the monuments prepared for museum purposes (7 and 9).

The Neolithic Age: From the First Farmers to the First Metallurgists. Pierre Machu. Toulouse, Fournié, 1999.

For a plan of the monument see http://www.megalithic.co.uk/modules.php?op=modload&name=a312&file=index&do=showpic&pid=104080