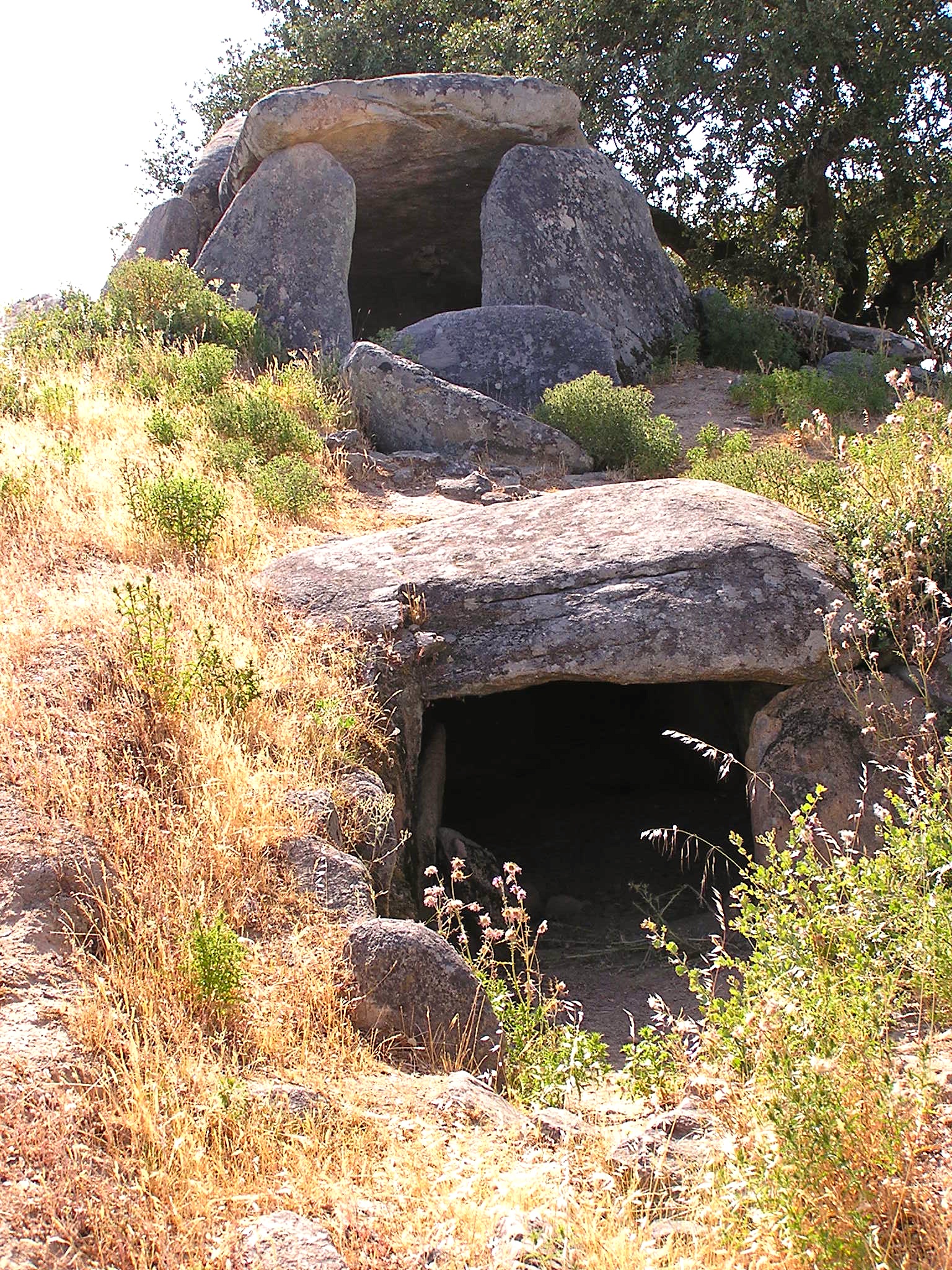 The Great Dolmen of Comenda da Igreja is a unique megalithic passage-tomb, mainly because of the size of its interior orthostats and because it appears to have two passages, one high above the other. The site’s tumulus is partially preserved and sits on a small hillock overlooking grazing land on a large farm.  Comenda da Igreja sits in an area rich in megalithic monuments and is not difficult to find just off the road from Montemor-o-Novo to San Giraldo. During its many excavations in the 20th Century, an abundance of votive grave goods were found, many of which are now part of the collection of the National Archaeological Museum in Lisbon. The tomb’s enormous capstone has broken in two, the result of a great thunderclap, according to local legend. The old shepherds and itinerant laborers who until recently used the tomb for shelter believed that the passage connected to tunnel leading to a nearby castle, or to an old house once used by a Moorish noble. This passage grave resembles Zambujeiro in both its grand scale and basic layout. It bears further evidence that this part of the Alentejo was a thriving Neolithic region no less important than Carnac in Brittany.

Archaeologists consider the Central Alentejo to be an important center of Neolithic megalith monumentality, in fact one of two great concentrations in the western Iberian zone. Manuel Calado, for one, believes that this region was settled by Mesolithic hunter-gatherers from the Tagus and Sado estuaries who had long regarded the granite outcrops of the Alentejo as a sacred zone. The Alentejo has a particularly high concentration of megalithic tombs, of which Anta Grande da Comenda de Igreja is a particularly fine example. The site dates to between 3645 and 2925 bce, making it an example of a long passage grave from the middle period of megalithic tomb building in the Alentejo. Short passage graves were the earliest tombs, followed by long passage graves and tholoi. The rich trove of grave goods found here reveals several different cultural phases, indicating occupation and reoccupation by successive cultures over several thousand years. Unfortunately, the passage grave has suffered disturbance since prehistoric times, making an authoritative delineation of cultural phases problematic because of unclear stratigraphy. What is clear is that grave goods from the early, middle, and late Neolithic periods are all intermingled at the site, proving a long-term occupation and use. These good include: 1) polished axes and triangular and trapeze-shaped microliths from the early Neolithic period; 2) a rabbit-shaped pendant, small carved “idol” plaques made from schist, round-based vessels that resemble ceramic products found at Neolithic settlements near Almeria, Spain, flint arrow heads retouched on both faces, and carved and polished schist crosses—from the middle Neolithic period; and 3) large flint dagger blades, open plate-like forms, and a copper awl from the late Neolithic period. (see figs. 1-3). One of the more striking artifacts removed from this site is a black slate plaque measuring 14 cm in height and weighing 156 grams. The plaque is engraved on one side with 12 registers of chevrons, or zig-zag patterns, and resemble the chevrons found on the interior of the Fourknocks passage tomb in County Meath, Ireland. The pattern alternates dark lines with finely carved grid-like shapes that give a light grey contrast to the darker lines. Some archaeologists speculate that these incised plaques were stylized idols. Others remark that the chevron patterns may be meant to mimic clothing. The plaques are also found at megalithic sites in Southern France and Corsica. A ceramic vase from the site dates to the late Neolithic period and is remarkable for its spherical form and three mammary-shaped protrusions. The vase is 5.8 cm in height and has a chestnut color.

The Great Dolmen of Comenda da Igreja was excavated by various archaeologists during the twentieth century, including the famed German team of Vera and Georg Leisner during roughly 30 years of intensive investigation of megaliths in Portugal. The Comenda da Igreja work is summarized in their magnum opus, Die Megalithgraber der Iberischen Halbinsel: Der Westen, published in 1959. The Leisners excavated many of the grave goods that now are on display in the National Archaeological Museum in Lisbon. The focus of the Leisners’ work was passage graves; they all but ignored menhirs and prehistoric settlements whose later discovery has added significant contextual evidence for interpretation of the passage graves.

This large tumulus is fairly intact and rests on a small hillock facing a valley to the east. Its central chamber is framed by eight giant orthostats (support stones) and capped by a massive slab that has broken in two. The two resulting slabs remain perched on their supports and jut upwards in dramatic fashion. The tops of the supports stones covered by the broken cap give the impression of a second entrance, but this part of the tumulus is simply the area that has suffered the worst erosion, exposing what originally was covered with rocks and earth. The monument’s interior chamber is 4.20 meters high and measures 4.80 x 4.50 meters. The entry passage is fairly low and narrow, and consists of .9 -1.2 meter high supports with several good-sized capstones. A small portico leading into the entryway is lined with .60 – .90 meter support stones on its left side. The right side has been destroyed. The passage is oriented 120 degrees southeast and fits the east-facing pattern of most other passage tombs in the Central Alentejo. The total length of the monument is about 16 meters. A discrete heritage fence encloses the site and protects it from farm animals and wayward off-road vehicles. The fence has not prevented the central chamber from becoming a lively rabbit warren. A beehive now graces the underside of the massive capstone, leaving on the most intrepid of explorers to descend into the central chamber.

From the town of Montemor-o-Novo, take the Number Two road north (direction Móra) towards the small village of São Geraldo. Just before the village look for a blue sign with white lettering (“Anta 1 km”) that points left. You will need to open a gate and proceed about 1 kilometer over a dirt path to another pair of gates, which encloses the site. The site is very easy to find. Nearby are a number of interesting megalithic sites, including the Dolmen of Estanque, in São Geraldo, which is molded into a house and serves as a storage area! Also nearby, on the Herdade da Comenda da Igreja, is a dolmen called the Small Dolmen of Comenda da Igreja. On the road between São Geraldo and Sabugueiro, on the left side, is the Dolmen of Comenda Grande, with its five uprights and small capstone sheltered by a tree. In the town of Montemor is the Museum of Archaeology, which does a good job of describing the patterns of human occupation in this area in prehistoric times.

“Standing Stones and Natural Outcrops: the Role of Ritual Monuments in the Neolithic Transition of the Central Alentejo,” in Monuments and Landscape in Atlantic Europe: Perception and Society during the Neolithic and Early Bronze Age. Chris Scarre, ed. London: Routledge, 2002: 17-35.

The round central chamber of the tholos, showing 2 entrances and massive flat stone on the chamber’s floor.