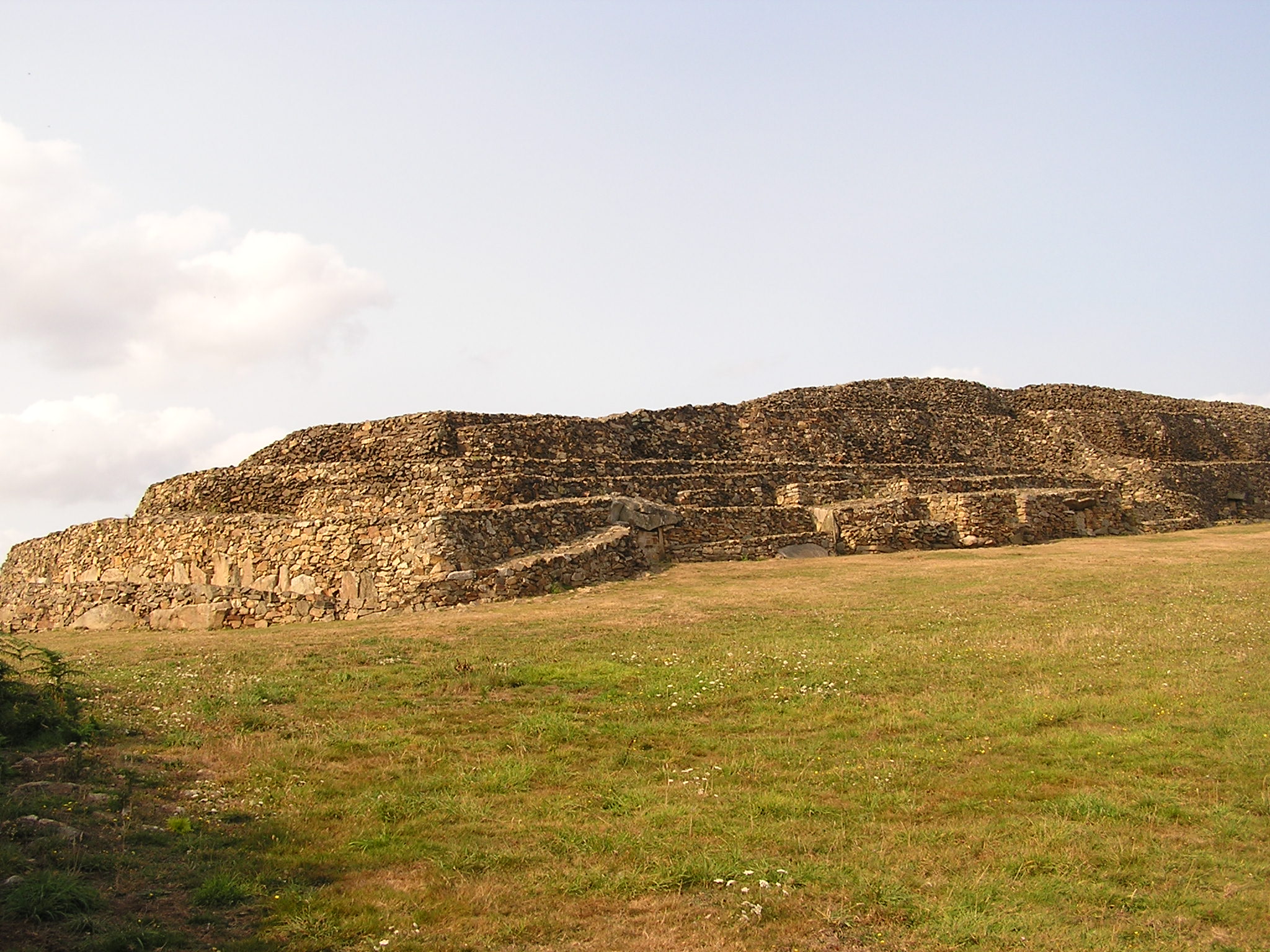 This magnificent cairn dates back to ca. 4850 b.c.e. making it one of the oldest of the large passage tombs in western Europe. It sits on the Kernéléhen Peninsula near the Baie de Morlaix north of Plouezoc’h village in Finistere, Brittany, France. 130 feet elevation, 48 N 40′ 03″, 3 W 51′ 31″. The 72 meters long by 25 meters wide cairn features 11 burial chambers and was built in two stages. According to radiocarbon dating, the first stage (between 4850 and 4250 b.c.e) was built using local dolerite and has five chambers; the second stage (between 4450 and 4000 b.c.e.) used granite and features 6 burial chambers. Pottery finds at the site indicate a period of reuse in the 3rd millennium B.C.E. The site was classified as a tumulus at an academic congress in Morlaix in 1850. Because it was in private ownership, the cairn was despoiled for paving stones until it was protected in the 1950s because of archaeological discoveries of its chambers. The entire site is now under local control and was extensively restored between 1954-68. Several of the chambers are topped with corbeled beehive roofs, but most have large granite slabs as roofs. The structure resembles in some ways the Grey Cairns of Camster in North Scotland. This includes the terraced ends and kerbs at the west end. There are 4 terraces on the northwest side, 3 terraces on the northeast side, 5 terraces on the southeast side, and 3 terraces on the northeast side. An excellent museum sits at the entrance to the complex. The cairn is reached by a small footpath. It is relatively accessible to visitors. For the layout of the cairn go to: http://www.megalithic.co.uk/modules.php?op=modload&name=a312&file=index&do=showpic&gid=466&pid=117724&orderby=dateD and http://www.megalithic.co.uk/modules.php?op=modload&name=a312&file=index&do=showpic&gid=466&pid=117723&orderby=dateD 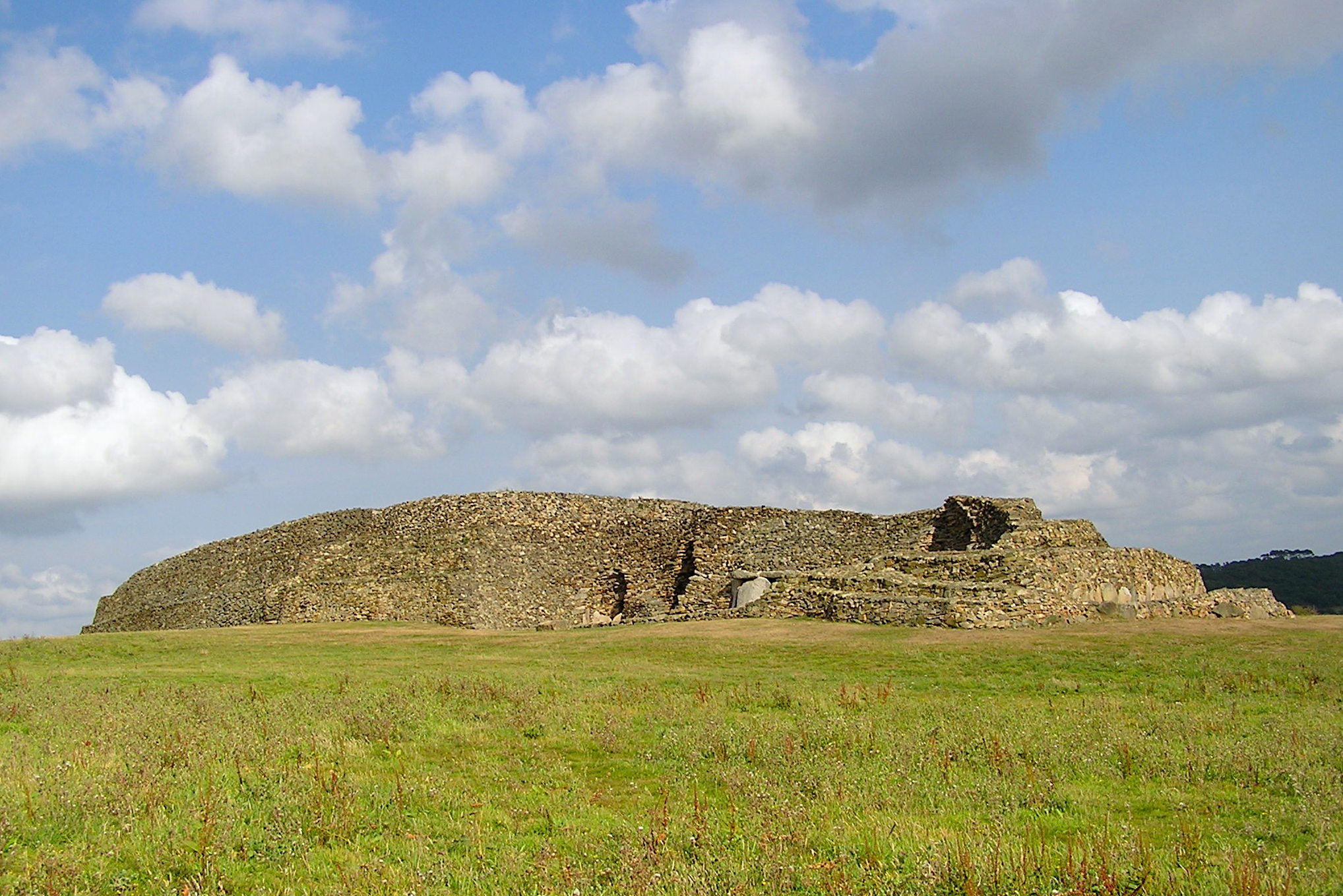 The structure sits on a promontory with panoramic views in all directions, especially on the southeast and southwest sides, which face the Bay of Morlaix and the Rade of Morlaix. 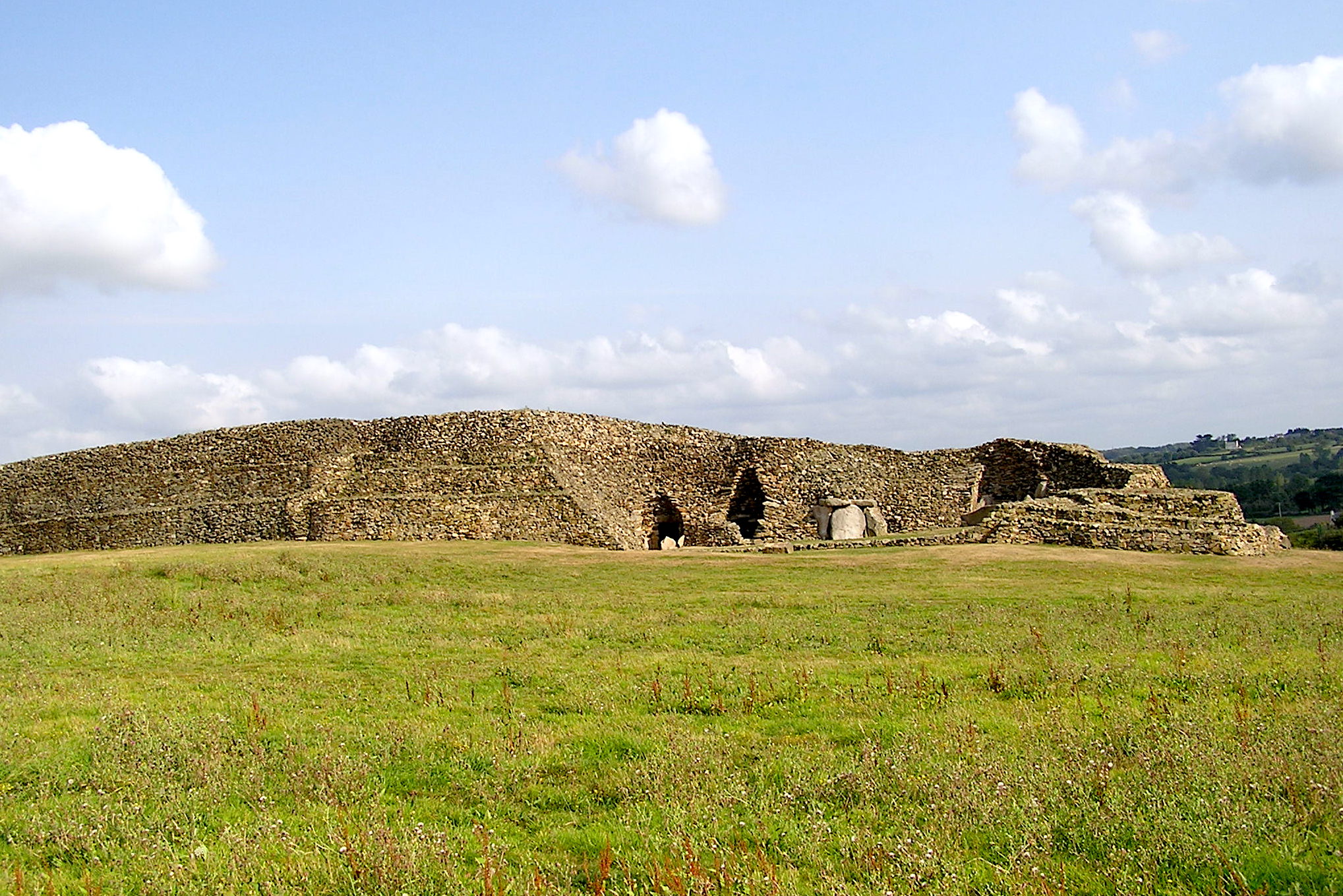 The entrances to the burial chambers (even the false chambers) all face southeast (between 140-145 degrees), indicating attention to sunrise on the Winter Solstice. This is a view of the northwest-facing side of the cairn. 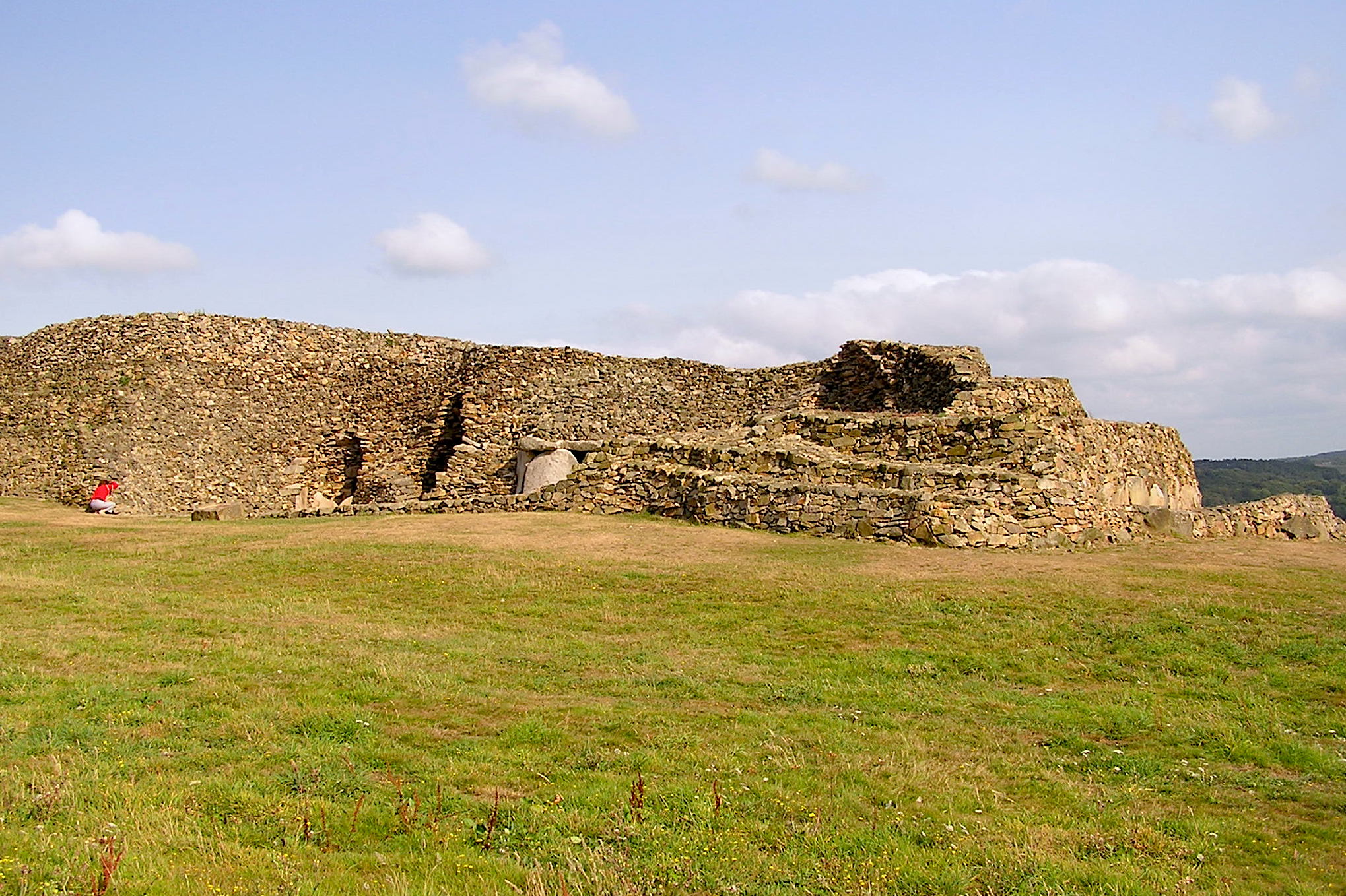 This is a good view of one of the terraced ends of the cairn. 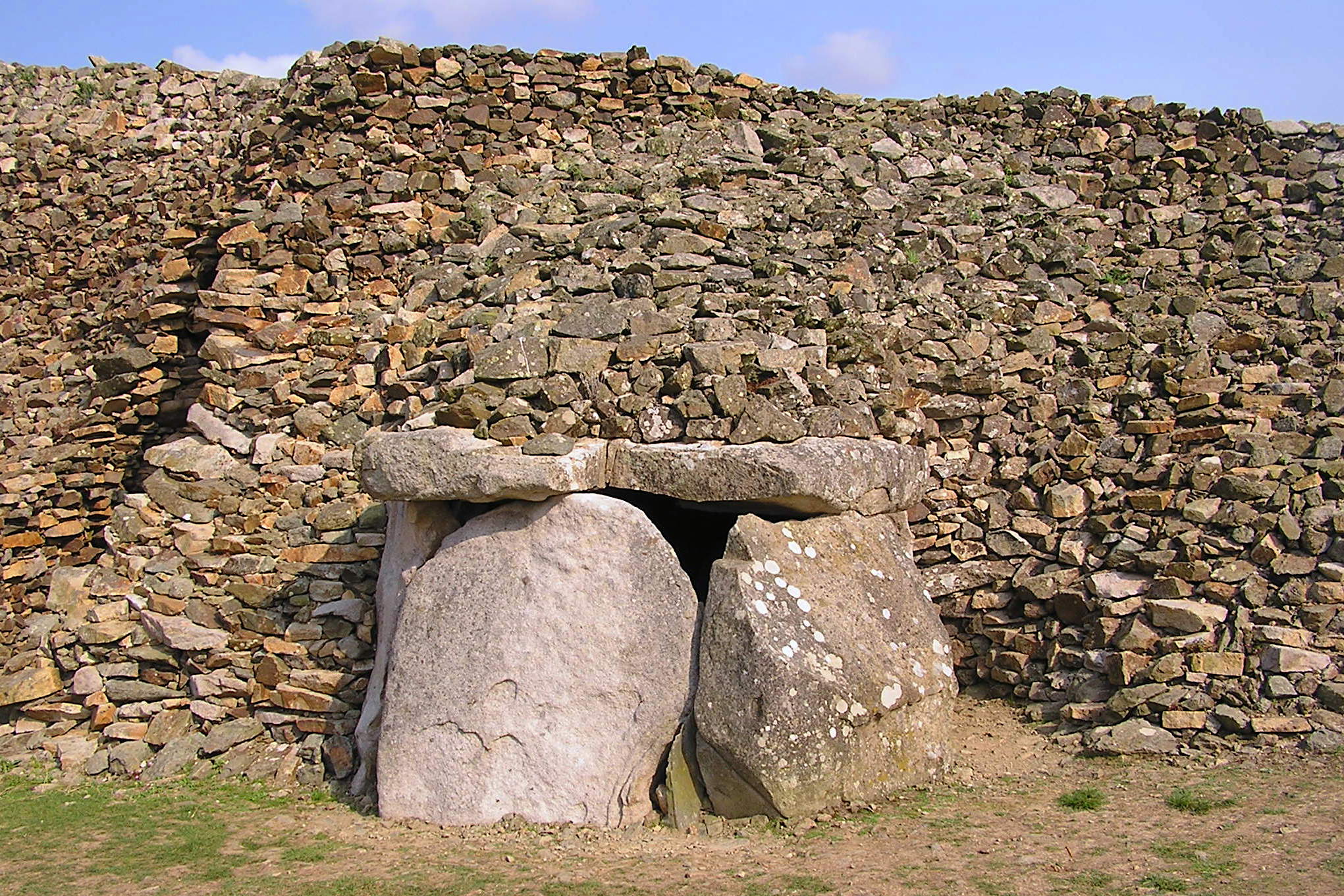 This is the Northwest end of a dolmen discovered during excavations. 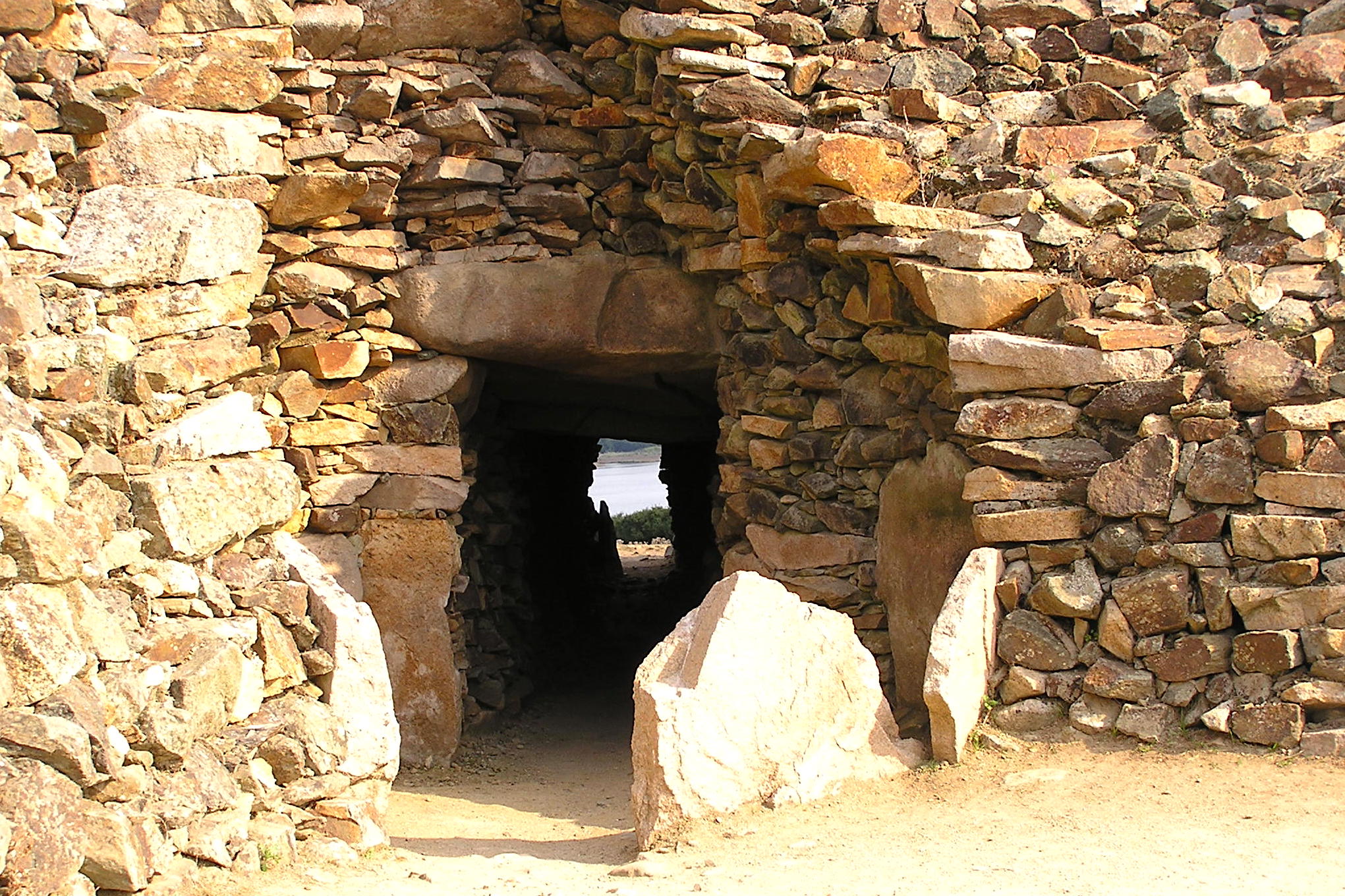 The entrances to the burial chambers are all facing southeast, indicating attention to sunrise on the Winter Solstice. The large capstone above the entrance is visible in this photo. The cairn’s multiple burial chambers indicate long-term use and many generations of burials.