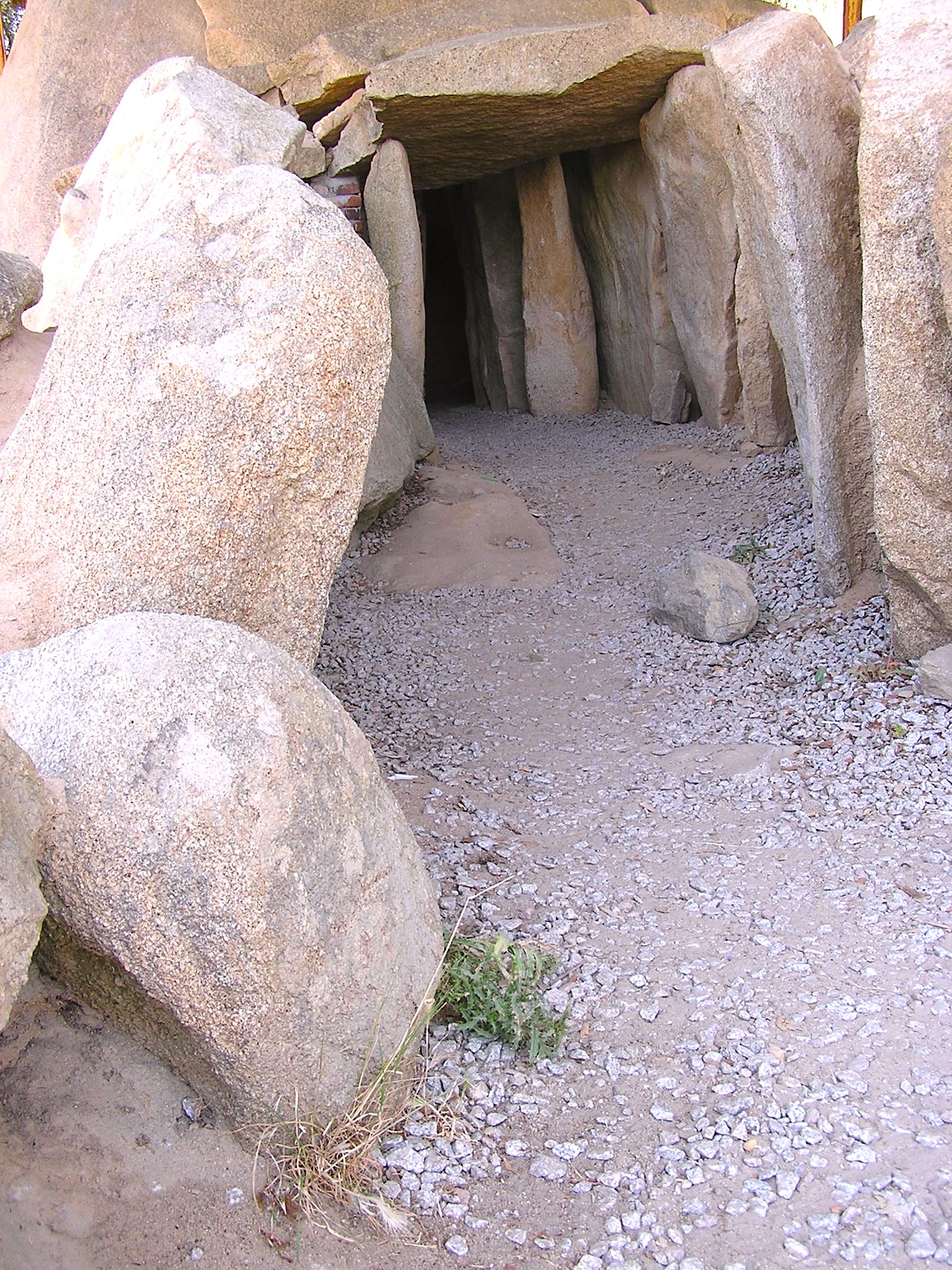 The great dolmen of Zambujeiro is a must-see monument, if for no other reason than its status as the largest dolmen in megalithic Europe. The site has many other attractions, in spite of the sloppy archaeological restoration that was inflicted on it during the twentieth century. One hopes that the dolmen will be restored to something resembling its original grandeur. Zambujeiro was constructed into the side of a hill and is generally oriented east/west, similar to its close neighbor, the Cromlech of Almendres. The monument’s width is between 5 to 6 meters across and 4 to 5 meters high. It is braced in several areas by flat stone piles, and its broken capstone has been removed and lies to the west nearby. The monument is easy to reach by car and well signposted. It is popular with New Agers, Neopagans, and neoshamans, many of whom come from long distances to practice their rituals of nature spirituality. During my site visits I have discovered several small stone altars in the dolmen’s central chamber. Zambujeiro was classified a national monument November 22, 1971.

Zambujeiro is in the geographical center of the large megalithic culture that developed in South-central Portugal, in an area that stretched from Montemor-O-Novo on the West to Elvas on the East, North as far as Portalegre, and South to Beja. This region contained a dense network of Early Neolithic settlements, one of the largest in the Iberian Peninsula. The monument’s scale indicates that it was built for an important political/religious figure or dynasty and was likely connected to the cromlechs of Almendres, about 5 km away. Most scholars date the site to around 3000 bce, and speculate that during its active period it was used as a cemetery and cult center by the agro-pastoral communities of the area. This conclusion is partly based on the extensive number of grave goods excavated at the site, including ceramic vases, callis beads, silex and crystal blades and arrowheads, copper instruments, decorated schist plates, and stone axes. The monument began as a gigantic mamoa (tumulus) with a diameter of at least 50 meters, and stretched from its polygonal crypt to its high passageway and exterior forecourt.

Zambujeiro was discovered and excavated by Dr. Enrique Leonor Pina beginning in 1965. At the time the only visible part of the dolmen was the enormous broken capstone. A number of grave goods were found during excavation indicating that the tomb had not been raided or despoiled for many centuries. These artefacts are now in the collection of the Museum of Evora. In 1987 the city of Évora became partially responsible for Zambujeiro’s protection, care, and development as a cultural heritage monument. Portuguese archaeologist Rui Parreira has directed excavations at the site during the latter part of the 20th century. Parreira has also directed archaeological work at the important Almendar passage grave in the Algarve.

Zambujeiro is a great chambered tumulus set in an olive grove on private land. The chambered tomb’s polygonal crypt is framed by 7 enormous orthostats that lean against each other and rise to a height of 8 meters above the floor. These orthostats are made of local granite that was likely smoothed using stone mauls similar to those used on the trilithons at Stonehenge. Recent graffiti mars several of the most impressive menhirs in the crypt. The massive capstone that covered the central chamber measured about 7 meters in diameter. It now lies broken to the west of the structure. The entry corridor is 12 meters long, 1.5 meters wide, and 2 meters high. It has 8 orthostats on its right side and 7 on its left side, and is buttressed by several piles of flat rock held together with mortar. The capstones for the most part are missing. Following excavation, a primitive metal roof was constructed to protect the site from wind, weather, and erosion. While probably necessary, this roof structure detracts from the site’s aesthetic integrity. During my visit on June 7, 2003, I found a round fire ring in the center of the crypt framed by four outer direction stones. There was also evidence of small fireplaces at the northeast end of the crypt and at the entrance. To the right of the entry chamber lies a massive, smooth, crescent-shaped stone whose relationship to the dolmen is unclear. This great fallen menhir is engraved with cupmarks, a common feature of Portuguese megaliths. This monument’s grand scale is persuasive evidence of a technologically sophisticated and hierarchically organized society.

Take the N114 from Evora to Montemor-o-Novo. After about 10 kms turn left and take the road to Guadalupe. At the crossroads in the town take a left turn and proceed down a dirt road to the village of Valverde (about 4 km). Take a left down the hill through the town in the direction of Evora, cross the river, and drive left past the agricultural station on your right. The monument is well marked by brown and white antas signs beginning in the town of Valverde. There is a visitor’s car park where a path across a bridge leads to the site. Alternatively, you can drive south from Evora on the 380 towards Alcacovas. Take a right to Valverde, and follow the signs. The virtue of the first route is that it takes you near the Almendres Cromlechs.

“Standing Stones and Natural Outcrops: the Role of Ritual Monuments in the Neolithic Transition of the Central Alentejo,” in Monuments and Landscape in Atlantic Europe: Perception and Society during the Neolithic and Early Bronze Age. Chris Scarre, ed. London: Routledge, 2002: 17-35.