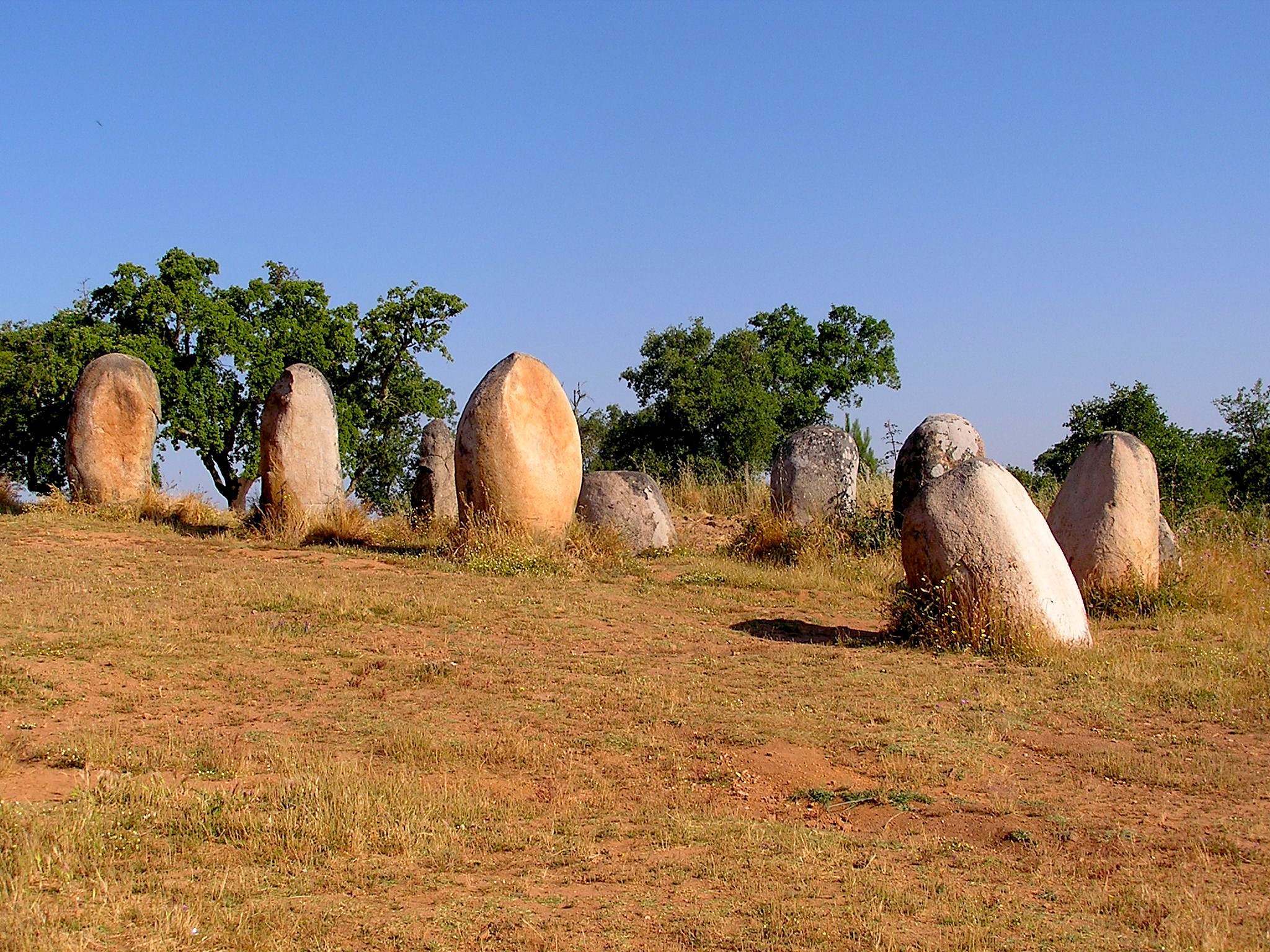 This impressive megalithic site is the largest stone circle on the Iberian Peninsula and is located in the megalith-rich environs of Evora, in the Alentejo region of eastern Portugal. Almendres is still relatively accessible and pristine, although it will likely be a short time until it has been “gentrified” for international tourism. The cromlech is very popular today with New Agers, Pagans, neo-Druids, and neo-shamans. Their candles, offerings, and campfires can usually be found at the site. Almendres’ location in an olive grove atop an east-facing hillside gives one a magnificent view of the eastern horizon and a number of suggestive sight lines to rising planets and stars. This is a site to linger over and stay the night if possible. It has unique egg-shaped stones, many of which are carved with cup-marks, shepherd’s croziers, faces, and geometric patterns that appear and disappear depending on the time of day and illumination. These “thunder eggs” were interpreted differently by locals, who named the site “Hill of the Wine Jars.” The stones at the top of the hillside, like those at Menec in Brittany, are larger than those at the bottom, magnifying their effect as one ascends the hill. The circle’s 92 stones occupy an enclosed area that is about 60m by 30m. The largest of the great “eggs” is about 2.5m high.

The Alentejo region of Portugal is a rocky and hilly topographical region that was likely inhabited during the early Neolithic era by long-established Mesolithic populations coming from the estuaries of the central coastal region near modern-day Lisbon. Like Stonehenge, Almendres was built in several stages. The earliest phase of the site’s construction occurred in the early Neolithic period (6-5th millennium bce, when a triple-ringed stone circle was built on the lower slopes (eastern edge) of the present site. (See fig. 1) The outermost ring was about 18.80m in diameter, and the innermost ring was 11.40m. This first circle is still discernible although the stones of the eastern end have disappeared and there has been some degradation of the pristine formation. (See fig. 2)

The second phase of construction occurred during the middle Neolithic period (5-4th millennium) and was a double-ringed ellipse that was built just to the west of the first circle and up to the crest of the hill. The larger of these irregular ellipses measured 43.60m at its widest side, while the lesser of the ellipses measured 32m. The final phase of construction happened during the late Neolithic period (4-3rd millennium) and saw certain alterations made, possibly for religious purposes, such as the carving of ten stones with suggestive symbols. The resulting formation of over 100 stones resembled a round head on the trunk of a body (viewed from the top of the hill) or an oval atop a circle (viewed from the bottom of the hill). If the oval were viewed as an ellipse the entire site could be interpreted as a planet (or the moon) orbiting a fixed central point. Some scholars believe that the earliest circle was transformed during this later period into a kind of forecourt that was used to prepare and solemnize the socio-religious rituals practiced in the larger ellipse.

Almendres likely served several functions: it was a place where the tribe assembled on significant days; it allowed for precise astronomical observations, in particular the risings and settings of the sun and moon during their annual and 19-year cycles, respectively; it was a place where religious worship occurred, likely centered on a deity idealized with huge solar eyes. Some commentators speculate that the site’s religion was a solar cult while others see resemblances to worship of the Mediterranean Great Mother Goddess. The astronomical alignments of the site together with the phallomorphic shapes of the menhirs and the carvings suggest at least some concern with propitiation of fertility deities. The use of this type of iconography occurred at the end of the Neolithic period and at the beginning of the Chalcolithic period, when the arts of metallurgy helped produce new artifacts of copper and perhaps corresponding new religious and cultural ideas. The Almendres stone circles organized the surrounding physical and psychological space over a two thousand-year period. The site was abandoned and its menhirs degraded during the Chalcolithic period. It seems no small miracle that the site has been preserved as well as it has over a four thousand-year period.

Almendres came to the world’s attention in 1964 following the survey report published by archaeologist Enrique Leonor Pinas. Pinas continued his work at the site during the 1960s and 1970s, collecting and cataloguing ceramic fragments and a polished stone axe. He published a plan of the site and photographs of carved menhirs. Archaeologist M. V. Gomes carried out excavations and restorations at the site during the 1980s and 1990s. His team’s work included clearing out brush, raising fallen menhirs, and discovering additional carved stones. During this second phase of work the current dirt road to the site was created. These archaeologists identified three phases of construction at the site, one during the early Neolithic period, a second during the middle Neolithic, and the last during the late Neothilic (see above). They speculated that the different phases of construction reflected changing economic, social, and ideological conditions. They also observed parallels to other sites in the area, particularly with regard to astronomical phenomena and the relationship of the various sites to each other. Dr. Gomes in particular attempted to interpret the various geometric shapes and patterns carved into the menhirs of the circle (See bibliography below).

Almendres is an unusual double-ringed stone ellipse or oval with a degraded, triple-ringed stone circle at its eastern edge and a small lobe at its western end. It lies on the Herdade do Almendres estate (owned by Jose Manuel Neves) about 12 kms west of Evora. The entire enclosed area of the site measures about 60m x 30m and gives a broad panorama of the Evora plain and Ossa mountain range to the east/northeast, and the Monfurado mountain range to the west. The cromlech is built on the descending slopes of an east-facing hillside (11% grade), giving it unparalleled views of the rising and settings of heavenly bodies throughout the year. Among the site’s 92 granite menhirs are ten that have significant reliefs or engravings. The shapes include crosiers, phalli, spirals, zigzag patterns, wavy lines, crescents, and cupmarks. These symbols connect the site with similar carved menhirs in the Carnac region of Brittany. At the enclosure’s south end, menhir 48 features an anthropomorphic representation made with linked circles and stylized crosiers or walking sticks. Two of the circles appear to be linked in a horizontal figure 8, while the third circle at the bottom of the stone appears unrelated in any geometric sense to the figures above it. The carvings appear on the western side of the menhir. Menhir 58 at the enclosure’s extreme north is decorated with three solar figures that radiate vertical lines. Several faint lunar crescents can also be discerned. One commentator discerns a similarity to the iconography of the Celtic goddess Awen in this figure. Menhir 57 has thirteen crosiers of natural size and shape, which some commentators believe were symbols of social prestige at funerary monuments in the high Alentejo of this period. Menhir 56 features carved figures, while another menhir near the western edge of the enclosure has an impressive array of cupmarks carved into its top.

A menhir on the south edge of the enclosure has been carved with a large semicircular cupmark. A local neo-shaman respondent claimed that she and her students have experienced visionary journeys when they placed their head inside this indentation. The larger menhirs are located near the top of the hillside and, like those at the alignments of Menec and Kermario in Brittany, appear even larger when viewed from the lower slopes of the hillside. The largest of the menhirs at the crest of the hill are 2.5m in height and of considerable girth. Several of them have been raised from the ground and set in concrete bases. The stones of this site are quite solid and many resemble great speckled eggs. This ties in with the site’s likely fertility associations. Although most of the stones are grey with white and green flecks, several stones are white, beige, pink, or rust-colored. A fallen menhir lies just off center inside the oval enclosure.

As archaeo-astronomer Pedro Alvim has noted, the site is oriented to the two annual equinoxes. The setting of the equinoctial sun occurs directly between a cleft in the Monfurado range. It cannot be mere chance that the site’s central long axis has a site line that goes directly to this cleft. This cleft is the only one visible from Almendres hillside. Moreover, a menhir at the top of the hill has a cleft that sites perfectly the rising sun on the vernal equinox. Alvim argues convincingly that Almendres provided a sophisticated astronomical observatory especially with regard to the seasonal risings and settings of the sun and the 19-year cycle of lunar risings and settings. As noted earlier, both solar and lunar symbolism are found carved onto the sites menhirs. It is possible that the site was used by cultures that embraced a lunar/goddess centered religion and by later cultures that embraced a solar/god centered religion.

Almendres farm is not difficult to find, but does entail travel on a dirt road for some distance. Take the N114 from Evora in the direction of Montemor-o-Novo. After about 10 km take a left turn to the village of Guadalupe. Follow the road 3 kms into the village where it becomes a dirt track. Brown and white “cromeleque” signs guide you the rest of the way. You will go about .8km before reaching Almendras Farm. As you pass the farmstead you should visit an excellent standing stone in an olive grove near the grain silos at the southern edge of the farm. There is a narrow walkway to the menhir and you can park at the side of the dirt road. Continue on the dirt track past a Roman altar and milestone for another 200m. Then follow the road left through woodland for another kilometer and the stones will appear on your left. There is an area for parking and camping at the top of the hillside.

“Standing Stones and Natural Outcrops: the Role of Ritual Monuments in the Neolithic Transition of the Central Alentejo,” in Monuments and Landscape in Atlantic Europe: Perception and Society during the Neolithic and Early Bronze Age. Chris Scarre, ed. London: Routledge, 2002: 17-35