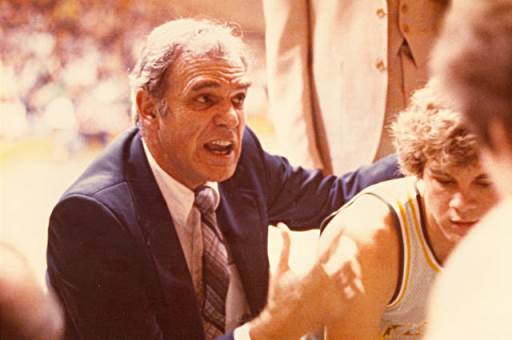 Legendary Stetson men’s basketball coach Glenn Wilkes was inducted into the National Collegiate Basketball Hall of Fame on Sunday in Kansas City, Mo. The National Association of Basketball Coaches elected Wilkes last April.
Joining Wilkes in the Class of 2014 are Grant Hill, Darrell Griffith, Shaquille O’Neal, Zelmo Beaty, Dale Brown, Gary Williams, and Howard Garfinkel. The group was inducted Sunday, Nov. 23 at the Arvest Bank Theatre at the midland in Kansas City as part of a three-day celebration of college basketball.
Wilkes roamed the Stetson sidelines for 36 years, leading the Hatters to an unparalleled era of success. During his 36-year coaching career, which came entirely at Stetson, Wilkes won 552 games and achieved 27 winning seasons.
The Wilkes era began in the 1957-58 season and ran consecutively through the 1992-93 campaign. He led the Hatters to a school record 22-win season in 1969-70 and again in 1974-75. Wilkes also took Stetson basketball from the NAIA ranks to the NCAA Division I level.
In addition to his accomplishments on the court, Wilkes served the basketball community by sponsoring the first coaching clinic in the south, the first basketball clinic for boys, the first basketball clinic for girls, and the first officials’ clinic. He is also the author of seven basketball-related books.
The Hall of Fame is located in the College Basketball Experience, a world-class entertainment facility adjacent to the Sprint Center in Kansas City. In 2006 the first class was inducted into the newly formed Hall of Fame. That class included the game’s inventor, James Naismith, and possibly its greatest coach in John Wooden.
GOHATTERS.COM