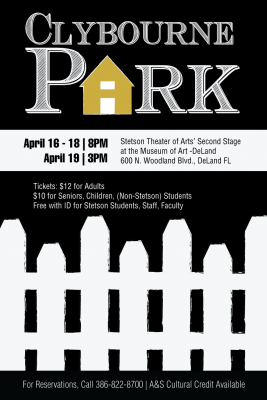 Inspired by Lorraine Hansberry’s A Raisin in the Sun​, this Tony Award and Pulitzer Prize winning satire looks at race and community within a fictional Chicago neighborhood. The play starts off in 1959 in a house located in a white neighborhood at 406 Clybourne St. in Chicago that is being sold to an African-American family. Next, the play jumps to the year 2009 after the neighborhood has changed into an African-American community undergoing gentrification; the house is sold to a white couple and the parallels are revealed.

Drew Neitzey, Stetson University senior, is directing this production for his senior research project. “I came across the play in high school and I immediately fell in love with it and wanted to find someway that I could work on this show,” he said.

“In today’s current news environment, Clyboure Park has the opportunity to make a bold impression on the Stetson community,” Neitzey said. “Clybourne Park ​isn’t just about race, but it’s about marginalized groups, community and the importance of memory, and I thought that this show could really speak to Stetson.”

The dialogue allows actors to create a layered world that audiences can identify with, Neitzey said. And although the topic seems to be controversial, Neitzey promises the audience an enjoyable experience. “It seems like such a heavy topic, but it’s funny and uncomfortable!” Neitzey said. “I think audiences will have a really good time with Clybourne​ and hopefully it will inspire some sort of dialogue about the treatment of the marginalized in our community.

“This show has been a blast to work on!” the director continued. “The cast has been working very hard on understanding and exploring these characters. Our creative team and crew have been working so hard to essentially build a house on stage and to create two different environments in one set. It’s definitely been a highlight of my theatre career and a wonderful production to cap the end of my time at Stetson,” Neitzey concluded.

Admission for this performance is $12 for adults, and $10 for seniors and students. (Stetson students, faculty and staff are admitted free with a valid ID.) Tickets will be available at the door and reserved tickets must be picked up 30 minutes prior to the start of the show. Box office will be open one hour prior to curtain. For information or reservations, call Stetson Theatre’s “Second Stage” box office at (386) 822-8700.