The Print Shop is on the move… again 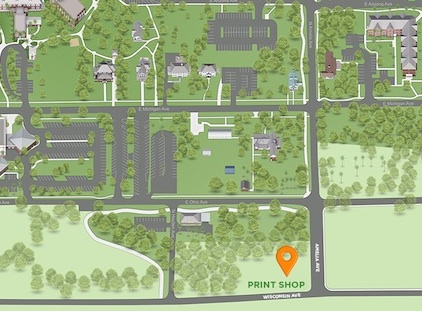 The Print Shop has a new location — 300 N. Amelia Ave., just at the corner of Amelia and Wisconsin avenues — otherwise known as Siberia.

Previously known as Stepp Office Supply, the Stetson Print Shop’s new location is one of the many changes on Stetson’s DeLand campus this semester.

However, most Stetson students and faculty have no clue where that is.

I decided to find out.

After conferring with three librarians and one Public Safety (P-Safe) officer, I received ambiguous directions that took me past Fraternity Row, past all the first-year dorms, past the Public Safety office, and, finally, past the school.

Located just at the edge of campus, stood the Print Shop—under heavy construction.

Nonetheless, plastered unobtrusively on the newly constructed window, were the office hours, 8:30 a.m.-4:30 p.m. The Print Shop is, indeed, open.

Don’t let the outer appearance of ongoing chaos mislead you into assuming that the Print Shop is not functional — that is far from the truth.

“It’s difficult for students to find it because, one, we’re now on the outer perimeter of campus, and two, they are put off by the construction,” said Johnson.

For nearly a month, not even Google Maps knew the Print Shop’s location.

“According to the United States Postal Service, we are located at 300 North Amelia, but if you Googled that, it would put you at the south end of DeLand,” said Johnson.

Instead of the five-minute walk from campus, the glitch would direct people to Orange City.

(The issue was recently resolved. Google the address, if you don’t believe me.)

Notified in July, the Print Shop had less than two weeks to move and make way for the

Welcome Center construction. (The two photos, at right, show the demolition of the old Print Shop in the summer, clearing the way for the new construction.)

“It didn’t make sense for the Print Shop to be in the center of campus,” said Albert Allen, associate vice president for Facilities Management. “No one should have an industrial building on our most valuable piece of real-estate.”

Because of the old Print Shop’s central location, many prospective students and family members would go there to ask for assistance, much of which the Print Shop was not equipped to provide. The

“It’s intended to serve our prospective and former students,” Allen said about the new Welcome Center. “It’s essentially a student services building where students can find what they need in one place instead of having these services all over the place.”

In short, the old Print Shop had to go.

Print Shop staff packed and moved expensive equipment, set up the correct network to power said equipment, and transformed a basic fraternity house into an operable printing company, all in two weeks. Temporarily.

Right before student move-in day, the Print Shop had to relocate once more because residents needed Frat House D for actual housing.

It’s evident that the Print Shop has survived a lot in the past few months with its relocations, offering more than a few roadblocks along the way. However delving into Stetson’s archives, we see that the Print Shop’s previous location has a long history of change. 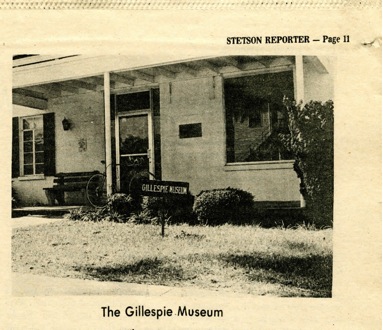 In the post-WWII 1940s, what we know as Stetson’s old Print Shop doubled as a highly demanded Soda Shop and Post Office, colloquially known as the “Slop Shop.”

Even in the late 40s, the Soda Shop’s central location operated as an unofficial student building.

“Being in the center of the campus it has become the gathering place, and a person just doesn’t get around if he doesn’t go there at least once a day,” stated the 1947 issue of the The Hatter, Stetson’s Yearbook.

In 1978, it was the “old” Gillespie Museum. The “long flat” and “unobtrusively gleaming” building, as reported in the 1978 issue of Stetson Reporter, drew in student and community involvement by featuring different types of rocks and minerals.

The museum outgrew the space, however, and in 1982, it was relocated to its current location, the former home of the Andrew F. Powell family at 234 E. Michigan Ave. The vacated building then became the Print Shop.

Before this move to the center of campus, Stetson’s elusive Print Shop was located in the basement of Flagler Hall — more or less the equivalent distance of the current Print Shop’s edge-of-campus commute.

“In another year and a half the copier portion of the Print Shop will move again,” said Johnson, regarding the current construction plans. “This operation will be moved once the renovation of the CUB is complete. Everything is being reworked and redone.”

When asked of other changes in the Print Shop, Johnson spoke of a delivery service in the works, as well as an online site to view templates and create logos in a more accessible way.

Although we were very comfortable with the Print Shop’s convenience, its new location allows it to flourish like an industry should, even if it may require a P-safe ride to get there.

Essentially, we need to welcome the Welcome Center, and its subsequent changes, with open arms (pun intended).