As the Stetson Hatters prepare to take on Kennesaw State in the opening round of the 2017 ASUN Tournament on Wednesday, Tuesday night was a chance to pick up some hardware at the pre-tournament banquet held at the Edmunds Center.

The Hatters, who finished second in the ASUN this spring, one game behind league champion Jacksonville, had five players recognized during the awards portion of the evening.

The top recipient for Stetson was sophomore pitcher Logan Gilbert, who took home Pitcher of the Year honors in addition to earning first team All-Conference honors and Academic All-Conference accolades. 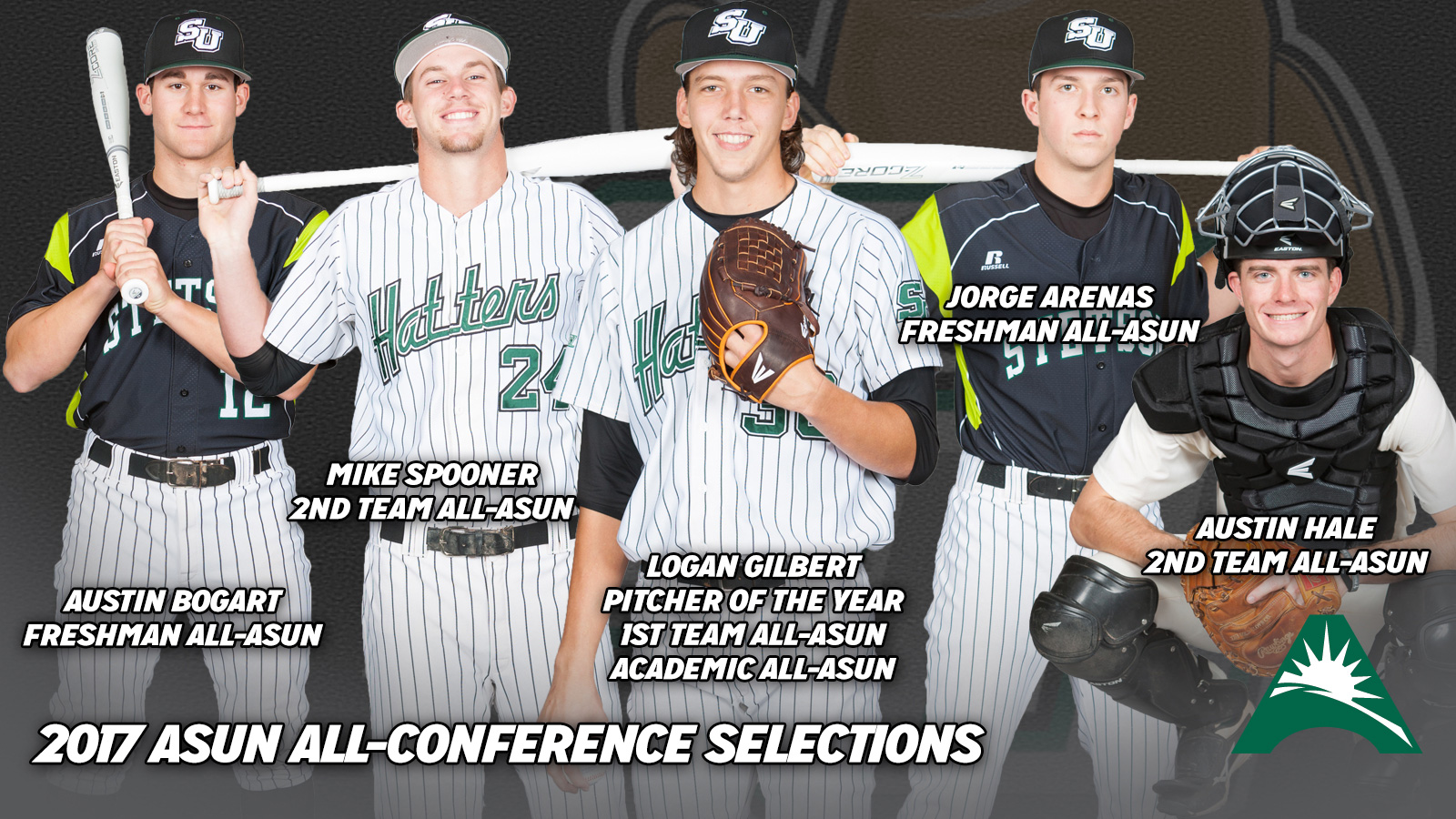 Gilbert, who finished the regular season with a perfect 10-0 record and a league best 1.71 ERA, is the third Hatter to be named the top pitcher in the ASUN since that award was first presented in 2004. He joins former Hatters Corey Kluber (2007) and Kurt Schluter (2011) as Pitcher of the Year winners.

Only FGCU designated hitter Nick Rivera, who was named ASUN Player of the Year, and UNF third basemen Alex Merr were unanimous selections to the All-Conference first team.

Spooner finished second on the squad with a .305 batting average this year. He had eight doubles, five home runs and a team-best 43 runs driven in. Hale bounced back from early season injury problems to catch almost every inning over the final 11 weeks of the year while leading Stetson with 20 extra-base hits. He had a big hand in the Hatters setting a school record with 520 strikeouts and he threw out almost 40 percent of the runners who tried to steal against him.

The ASUN All-Conference second team included five players from sixth place Lipscomb, two each from Jacksonville, Stetson and North Florida and one each from Kennesaw State and NJIT.

The Hatters also placed two players on the ASUN All-Freshman team. Infielder Jorge Arenas and outfielder/pitcher Austin Bogart were both unanimous selections to the team, as were Richie Garcia of FGCU and Ruben Someillan of Jacksonville.

Arenas was the Hatters’ leading hitter in conference play this spring, batting .355 in league play. Overall, he hit .267 with four home runs and 27 RBI while playing solid defense at shortstop. Bogart hit .261 on the year with four homers and 27 RBI.

Gilbert, who carries a 3.63 GPA in Business Systems & Analytics, was the only Hatter named to the Academic All-Conference squad. Jacksonville placed four players on that team with NJIT right behind with three. The other six league members had one player each named to the team.

In addition to Gilbert and Rivera, the league’s top awards went FGCU’s Garcia for Freshman of the Year, NJIT’s Cody Kramer as Scholar-Athlete of the Year, and Jacksonville’s Chris Hayes as Coach of the Year. Lipscomb’s Michael Gigliotti and Kennesaw State’s Grant Williams shared the Defensive Player of the Year award.

Play in the 2017 ASUN Championship Tournament is scheduled to begin on Wednesday with top seeded Jacksonville taking on No. 6 Lipscomb at 11 a.m. Florida Gulf Coast and North Florida will square off in the second game at 3 p.m. with the Hatters and Owls in the nightcap at 7 p.m.

All of the games in the tournament will be available on ESPN3 or the Watch ESPN app.

For complete coverage of the ASUN Tournament visit the ASUN web site at ASUNsports.org.

About Stetson University Athletics: Stetson University’s Athletics Program has a vision of developing a culture of champions athletically, academically and within the community. This vision is accomplished through a mission of recruiting and developing student-athletes, coaches and staff, creating a culture of champions, within and outside of competition. The department operates with five core values: Championship Culture, Integrity, Excellence, Pride/Tradition and Leadership. To learn more about the Vision, Mission and Core Values for Stetson Athletics, visit GoHatters.com and click on Mission Statement under the Inside Athletics tab.