Florida Formations: Shifting Seas and Sediments at Stetson University’s Gillespie Museum tells the geologic history of the state through its distinctive rock units and array of ocean-formed carbonate formations, each with a story about past Florida environments and climates.

This exhibit is free and open to the public.

In connection with this new exhibit, a presentation on “Florida’s Surficial Geologic Formations” will be presented in the museum’s Science Café series on Thursday, Nov. 16, at 7 p.m. It will feature Assistant State Geologist Guy “Harley” Means, who has been a consultant to the project.

“Florida is known for many things including beaches, Disney World, oranges and plentiful sunshine.  But not many people appreciate the geology that makes our state unique,” explained Means.  “We don’t have mountains, canyons or much topography, but we do have a diversity of geologic features that are equally impressive.”

Admission to the museum and Science Cafe are free and open to the public, and Cultural Credit is available to undergraduate students. The Gillespie Museum is at 234 E. Michigan Ave., DeLand. For more information call 386.822.7330.

Guy H. (“Harley”) Means was born and raised in Tallahassee.  He attended Florida State University where he received both a bachelor and master of science degree in geology.  He is a licensed Professional Geologist and has been employed by the Florida Department of Environmental Protection, Office of the Florida Geological Survey (FGS), in Tallahassee for over twenty years.

During his tenure at FGS, he has acquired professional experience in Florida stratigraphy, paleontology, hydrogeology, archeology, zoology, natural history and conservation.  His research interests include: stratigraphy, paleontology, karst, geoarchaeology and the hydrogeology of Florida’s numerous springs.  Means coauthored a popular book entitled, Roadside Geology of Florida, and has published numerous articles and scientific publications on many aspects of Florida’s geology, paleontology and archaeology. 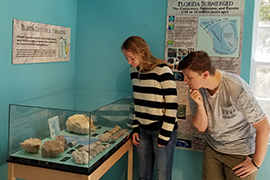 The Florida Formations exhibit was designed and created by Karen Cole, Ph.D., director of the Gillespie Museum at Stetson University; museum staff member Wendy Tanner, an anthropologist and archaeologist; and Ben Tanner, Ph.D., assistant professor in the Environmental Science and Studies Department at Stetson University.

Means, along with his co-author, Jonathan R. Bryant of Roadside Geology of Florida (Mountain Press), worked with the Gillespie staff and faculty on shaping the narrative and timeframe of the exhibit interpretative panels.  Copies of the book will be available during the Science Café for signing by the author.

From a geological perspective, the Florida that is known today, the distinctive peninsula of land and gently sloping shorelines, is a relatively new phenomenon. As Professor Tanner explains, “Geology is not the first thing that comes to mind when people think of Florida, but we have fascinating geological history, particularly with respect to sea level changes. Some of our best records of past sea levels come from Florida, and our Florida formations reveal the dynamic nature of our local environment.”

The exhibit opens with illustrations and a description of how Florida developed from its African origins and igneous and metamorphic rock foundation that formed approximately 500 million years ago, to the separation of the land mass from the Florida-containing, mega-continent called Gondwana. The exhibit then takes viewers through the four distinct time periods of Florida’s formation, beginning about 145 million years ago, highlighting global conditions at the time, sea level variances, marine and mammal activity, and key formations.