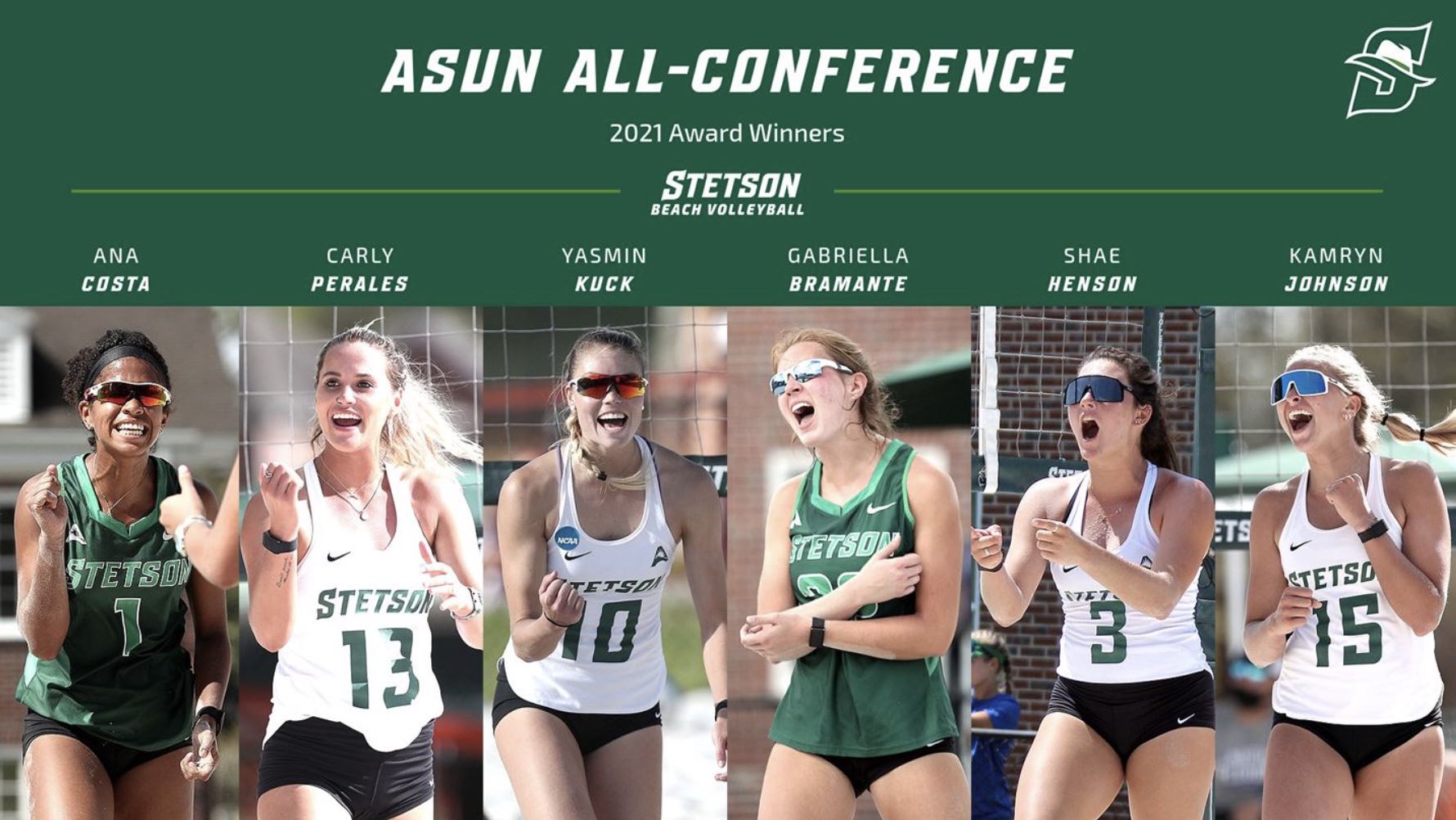 Stetson University seniors Ana Costa (Sergipe, Brazil) and Carly Perales (Round Rock, Texas) have been named the ASUN Beach Volleyball Pair of the Year, the league announced April 30.  It is the first ASUN Pair of the Year award for Costa and Perales, and the sixth consecutive time a Hatter pair has been tabbed with the league’s top award.

In addition, the Hatters saw three of their pairs land a spot on the league’s all-conference teams. Joining Costa and Perales on the first team were Yasmin Kuck (Montpellier, France) and Gabriella Bramante (Apex, N.C.).

Perales and Costa played the entire season at Pair 1, posting a record of 23-9.  They became the first ASUN pair ever to win four Pair of the Week Awards in the same season. They competed against the No. 1 Pair from ranked opponents 18 times and won 10 of those matches.  They became the first Stetson duo to defeat a No. 1 Pair from the No. 1 team in the country when they defeated FSU’s Alaina Chacon and Molly McBain in straight sets on March 19.  They went 9-2 vs. ASUN opponents, and 17 of their 23 wins came in straight sets. On March 28, Perales became the first ASUN player to record 100 career dual-match victories.

Kuck and Bramante compiled a season record of 20-12, including a 9-1 record at Pair 2 and an 11-11 mark at Pair 3. They went a perfect 3-0 in the ASUN Championship at Pair 2, winning all six sets. The Hatters duo registered seven wins over ranked opponents and went 10-1 vs. ASUN opponents. Sixteen of their 20 wins came in straight sets.

Johnson and Henson registered a 23-9 record in 2021, going 15-7 at Pair 2 and 8-2 at Pair 3.  They recorded a perfect 3-0 mark in the ASUN Championship at Pair 3, winning all six sets. The pairing collected 10 wins over ranked opponents and went 10-1 vs. ASUN opponents overall.  Nineteen of their 23 wins came in straight sets.

As a result of no postseason awards being issued last season, Johnson and Henson were both eligible for and selected to the ASUN All-Freshman team.

Kuck, meanwhile, was unanimously selected to the ASUN All-Academic team.  She is a Business Administration major with a 3.83 cumulative GPA.

The 19th-ranked Hatters (19-13) won seven duals against ranked opponents and advanced to the finals of the ASUN Championship for the eighth year in a row.