On June 8, Stetson Director of Athletics Jeff Altier ’82 and Deputy Director of Athletics Alicia Queally made the announcement official. Young becomes the university’s 10th head football coach. He is replacing Roger Hughes, PhD, who has left coaching to become the president of Doane University in Crete, Nebraska, his alma mater.

Young is returning to the Stetson program. He originally was hired in late 2012, just as the Hatters were resuming college football, and served as defensive coordinator for eight years before spending last year as a member of the football staff at Georgia Southern University, his alma mater. He played defensive back there and in 1997 earned a Bachelor of Science degree in parks and recreation administration.

“First and foremost, I want to thank Jeff, Alicia and the entire committee for giving me the opportunity to participate in the process to identify the next head coach at Stetson University,” Young said. “The opportunity to spend time with President Christopher Roellke, as well as Faculty Athletics Representative Dr. Mike Bitter, was awesome.

“I also want to make sure to thank Roger Hughes and former president Wendy Libby for giving me a chance to be a part of this university and this special community, and be a part of starting the Stetson football program from the ground up. I can’t wait to have an opportunity to meet with the players, so I can share with them the vision I have for how we are going to be successful on and off the field. We are going to continue to be a program the DeLand community can be proud of.”

Queally, who led the search for a new Stetson football coach, said it was apparent that Young was the right coach for the job.

“I am thrilled for Brian Young to be coming back to campus,” Queally said. “He is the right coach at the right time to lead our football program. It became apparent throughout the search how much Brian was, and is, admired by the current team, former student-athletes and members of the Stetson community. His name kept emerging as someone who could lead our program with passion and grit. Brian has the proven ability to recruit student-athletes who are able to thrive in Stetson’s challenging academic environment while also becoming leaders on the football field and in the community.”

Young’s defensive units were known for their attacking style of play, especially in pass defense where the Hatters ranked first or second in the Pioneer Football League six times. Stetson also was regularly ranked among the top teams in the PFL in sacks and turnovers forced.

Additionally, during his previous time at Stetson, Young had a direct hand in the development of the Hatters’ four-time All-American Donald Payne, who has gone on to a successful career in the National Football League.

Payne, who was a three-time PFL Defensive Player of the Year, said it was his relationship with Young that helped him become the man he is today.

“When I first came on my visit to Stetson, Coach Young was the one who made a connection with me and with my mom,” Payne said. “I lost my father when I was just 13, and he became a father figure for me in addition to being my coach. He was tough on me, but he was always fair. I know from experience that parents can feel good about leaving their sons with him because he is going to take care of them, both on and off the field.

“I am so proud of him because I know all of the work and time he has put in during his career to get to this point. Without him, I don’t know that I would have had the kind of career that I had during my time at Stetson, or even if I would have stayed at Stetson. When I made it to the NFL, he made it with me and I am just so happy for him.”

Aside from his defensive responsibilities as coordinator and defensive backs coach, Young worked with the Hatters’ special teams and served as the staff liaison to pro scouts and to post-season all-star games.

I am thrilled for Brian Young to be coming back to campus. He is the right coach at the right time to lead our football program. It became apparent throughout the search how much Brian was, and is, admired by the current team, former student-athletes and members of the Stetson community. His name kept emerging as someone who could lead our program with passion and grit.” — Deputy Director of Athletics Alicia Queally, who led the coaching search

Young, a native of Savannah, Georgia, first arrived at Stetson from Cornell University in upstate New York, where he served as defensive backs coach for two seasons. Young has enjoyed a long and distinguished career as a coach at multiple levels, including time in the NFL when he worked with the Buffalo Bills as a training camp assistant. He also had a successful tenure as a high school football and basketball coach.

His career has primarily been focused on the collegiate ranks. He spent five seasons on the coaching staff at NCAA Division III Mississippi College, starting as secondary coach and special teams coordinator before adding the titles of recruiting coordinator and, finally, defensive coordinator.

Prior to his coaching career, Young spent the 2000 and 2001 seasons playing Arena Football, first for the Bismarck Blaze and then for the Duluth Lumberjacks.

During the most recent season at Georgia Southern, he helped the Eagles to an 8-5 record that included victories over South Alabama, Troy, Florida Atlantic and, in the R+L Carriers New Orleans Bowl, a 38-3 rout of Louisiana Tech. The Eagles had a player, Derrick Canteen, who led the nation in interceptions.

“Congratulations to Coach Brian Young on being named the head football coach at Stetson University,” Georgia Southern head coach Chad Lunsford said. “Brian has done an awesome job in his time here at Georgia Southern, first as a player and, this past year, as an analyst. … He will do a great job at Stetson.” 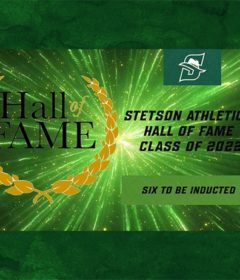 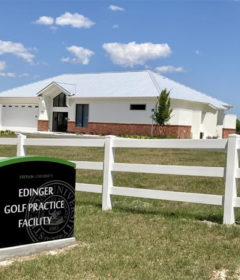 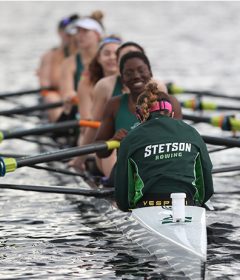