• Valrie Chambers, PhD, associate professor of accounting, was listed as a contributor for an entry in the Tax Adviser, titled “Advance child tax credits,” on Oct. 1.

• On Oct. 2, Mitchell Reddish, PhD, the O.L. Walker Professor of Christian Studies and Chair of Religious Studies, was quoted in the Daytona Beach News-Journal article “COVID-19, Afghanistan, killer floods and fires, riots: Is the end of the world near?” “People of every century thought they were living in end times,” Reddish said. “I personally don’t think what we’re living in now is any worse than other periods of history.”

• Stetson was part of an Oct. 6 story, titled “These Central Florida colleges have some of the largest endowments in the state,” published by the Orlando Business Journal.

• Professor Rajni Shankar-Brown was featured in a story on homeless college students in Broward County and throughout the nation, called “Marie Woodson wants to tackle Florida’s ‘rampant’ college homelessness problem” in Florida Politics. Also, Shankar-Smith was cited on the topic of homelessness by NewsDaytonaBeach.com. 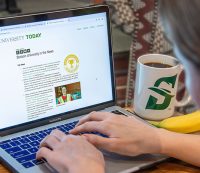 • Stetson University’s School of Music was mentioned in Orlando At Play on Oct. 7 for the “Guitar on the Rocks” performance.

• Adjunct Professor Jay Wolfson was quoted in an Oct. 5 segment on WFLA about concert venues requiring proof of vaccines and/or covid tests.

• Alumna Kristen Taylor was featured extensively in an Oct. 1 Market Watch article, titled “In its 50-year history, Walt Disney World has evolved from a $3.50-a-ticket amusement park to a ‘luxury-priced destination’.” Taylor, who attended Stetson in the 1970s, reflected on how much ticket prices have risen for the Florida attraction.

• Alumnus Tom Schmid was featured inThe Delaware Gazetteon Oct. 6 after being selected as the president and CEO of the Columbus Zoo and Aquarium.