Take Back the Night: A March and Gathering to End Sexual Violence on Wednesday, April 13 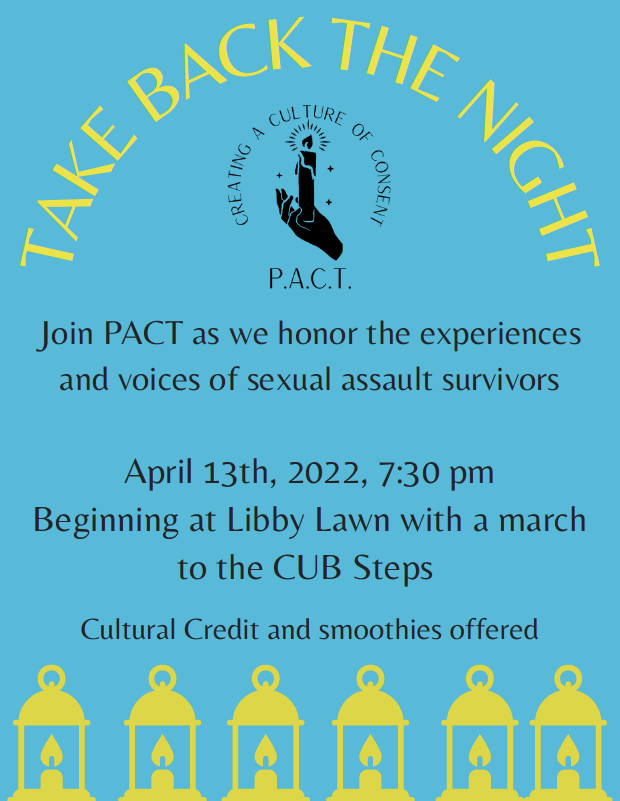 Survivors of sexual assault and others will gather Wednesday, April 13, to Take Back the Night by sharing their stories and promoting a culture of consent on campus.

Take Back the Night is an annual event designed to empower survivors and stop sexual violence and harassment. The gathering will begin at 7:30 p.m. on Libby Lawn beside the Templeton Fountain with activities and information. Afterward, participants will march to Holler Fountain in Palm Court and back to the steps of the Carlton Union Building.

Cultural Credit will be available.

Participants can receive free smoothies, followed by a speakout for survivors of sexual assault to share their stories in a safe and supportive environment. Other allies and loved ones can speak, too. Representatives from Stetson’s Student Counseling Services will attend, as well as victim advocates from the Volusia Rape Crisis Center, if anyone would like to speak with them.

“The idea is that sharing in a safe and supportive environment will help them on their healing, and Take Back the Night is a super safe and supportive environment,” said Smith-Paez, who began organizing the Take Back the Night event as a first-year student at Stetson in 2016 and now works for the university. “It’s really the most powerful part of the event.”

Take Back the Night traces its beginnings to the 1970s when worldwide efforts began to combat sexual violence against women. Smith-Paez says a lot of progress has been made since then, “and we still have a long way to go.”

Stetson’s Peer Advisory Council for Title IX, which is organizing the event, works to create a culture of consent on campus, helping to prevent and raise awareness about sexual violence, she said.

“By creating a culture of consent, that makes it to where consent is the norm, where talking about it is the norm. We want to change the culture to make it safer for women and everybody.”