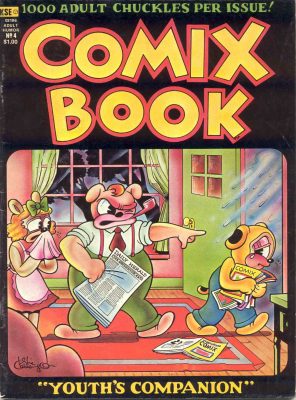 If you’re looking for a new Scrabble word to rack up some points, consider ‘comix’. Don’t believe me? Just check the Oxford English Dictionary, and while you’re at it, take a peek at the third referenced quotation. There you will find the name of Stetson University’s own Dr. Rusty Witek.

What does it mean?

The term comix comes “from the underground comics of the 1960s and 1970s,” according to Dr. Witek. He explains that “there’s at least a suggestion that the X comes the x-rating related to sexually explicit content”. The underground comics Witek mentions were a movement that pushed back. Using the word “comix” would indicate to readers that the work was “outside the mainstream” or “alternative”. Today, Witek says that cartoonists using the term in reference to their work likely see themselves as “direct descendants” from the original underground comics writers. In some cases, it is used as an alternative spelling.

Before Dr. Witek moved over to the Creative Arts department, he was a member of the English department’s faculty. As such, he loves the Oxford English Dictionary—or the OED, as he referred to it. Until recently, he had no idea he was listed as a reference on the online version for the word ‘comix’. As someone who has “always loved learning the history of words,” Dr. Witek described the discovery as “thrilling”.

Witek’s finding of the reference was accidental. “My wife, Terri, pointed out a letter to the editor in the New York Times,” Witek explained. In it, a reader complained of the misuse of the word, so Witek looked it up.  Under the quotations, the third authority named was Witek himself.

“Those undergrounds are central to why I’m even here,” Witek said. He just finished teaching a class on them in one of the three courses he instructs focused on comics. Witek points to the shift between comics being sold at newsstands in the 1930s to Pulitzer Prizes be awarded to graphic novels in the 90s. It’s a shift he says cannot be explained without bringing comix into the discussion.”There probably wouldn’t be a college professor in my position if it hadn’t been for the underground comix,” he added.