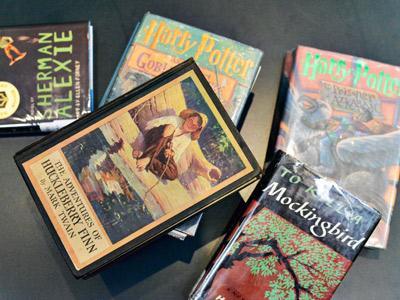 Reading for pleasure can positively affect a student’s GPA. Required reading for school? Not so much, according to a recent study by Chris Ferguson, Ph.D., chair of the psychology department at Stetson University.

Ferguson, who is probably best known for his ongoing research on the effects of violent video games, decided to conduct research on “banned” books because so little is known about the effects such books have on readers.

“Many books targeted toward young readers are banned or challenged in school and public libraries because of ‘edgy’ violent, sexual or occult content,” said Ferguson. And while hundreds of research studies have been done about video games, “Little is known about the possible relationship between banned books and negative outcomes in children,” he said.

For the research, Ferguson studied the responses of 282 12- to 18-year-old students who were asked whether they had read any of 30 banned or challenged books. Included on the list were books such as The Hunger Games, the Harry Potter series, The Adventures of Huckleberry Finn, And Tango Makes Three, and Thirteen Reasons Why.

“Concerns about objectionable content usually posit a relationship between consuming such content and some form of harm related to mental health, or aggressive or anti-social behavior,” said Ferguson. “These arguments are common when dealing with censorship.”

“A relationship does exist between banned book reading and mental health symptoms in a small subsample of readers,” said Ferguson, which was an unexpected outcome. “Whether that relationship is causal or cathartic requires further research.”

Ferguson’s research, Is Reading “Banned” Books Associated With Behavior Problems in Young Readers? The Influence of Controversial Young Adult Books on the Psychological Well-Being of Adolescents, is scheduled to be published this year in the American Psychological Association’s magazine, Psychology of Aesthetics, Creativity and the Arts.