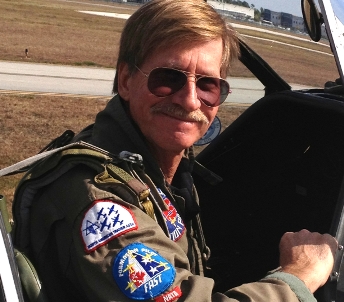 Author Syd Jones, pictured, and his wife KT Budde-Jones will be teaching a three-session Lifelong Learning course at Stetson University’s Celebration campus in November. The course is about the little known events before, during and after the attack on Pearl Harbor and the relationship the events had on each other and the course of World War II. One aspect of the course will center on the Niihau Zero that crash-landed on Dec. 7, 1941. Syd Jones’s new book, Before and Beyond the Niihau Zero, has recently been published.

Stetson University is hosting a book-signing at the Stetson Celebration Center, located at 800 Celebration Ave. Celebration, Fla., on Thursday, Nov. 6, from 5:30-7 p.m. in the Atrium. Jones will be giving a short presentation about how they discovered and recovered the Niihau Zero. Autographed copies of Before and Beyond the Niihau Zero will be available for purchase for the special price of $15 by cash or check only. For more information please call 321-939-7600.

About the Book, Before and Beyond the Niihau Zero:

The day of the attack on Pearl Harbor, a battle damaged Japanese Zero landed on a remote, privately owned Hawaiian island.  The Zero pilot survived for almost a week on what locals call “the Forbidden Island,” assisted by a local worker while terrorizing the island’s population before being killed by a native Hawaiian.

Though the air raid on December 7, 1941 caught many by surprise, the island’s owner had actually begun preparations against the attack years earlier, inspired by a remarkably accurate prophecy.

The wreckage of the Japanese plane was abandoned on the island, but it’s legacy was not forgotten. Sixty-five years later the Zero and the story surrounding it became part of a new aviation museum in Hawaii. The Zero display brought to the forefront what happened the day of the attack, the conflict that ensued on the island in the days that followed, while unexpectedly generating a modern controversy in the process.

In researching the existence of the “Niihau Zero” the author was allowed unprecedented access to the ” Forbidden Island,” was able to interview its owners and inhabitants, and arrange for the Zero artifacts to be placed on public display.

This book contains original reports as well as documents never before published that give unique perspectives into one of the most curious and thought provoking events of WWII.

Syd Jones has worked for several aviation museums as a restoration specialist including the Pacific Aviation Museum-Pearl Harbor as the founding Restoration Director and later as Interim Curator. He has had a lifetime interest in actively pursuing lost history, previously working for almost two decades on maritime archaeological recovery expeditions, including the richest Spanish galleon ever recovered, the Nuestra Senora De Atocha. The inside story of this highly publicized event was captured by Syd in his previous book “Atocha Treasure Adventures: Sweat of the Sun, Tears of the Moon”.

Syd and his wife KT Budde-Jones have visited many WWII European and Pacific battlefields, and have flown for years on the airshow circuit in WWII military aircraft, including the Centennial of Flight commemoration and Doolittle Raiders reunions.

Syd and KT when not seen biking around Celebration, Florida can often be found flying their own WWII T-6 advanced combat trainer en route to their next adventure.