At a retirement party on May 2, 2017, Irene Gilmore was presented with a check for more than $1,000 collected from the Stetson Community as a going-away present, after her nearly 59 years in Stetson Dining Services.

Gilmore said afterward: “I’m on a love high and I haven’t come down. I want to thank everybody who had a hand in all this. You can’t know how much this means to me.” 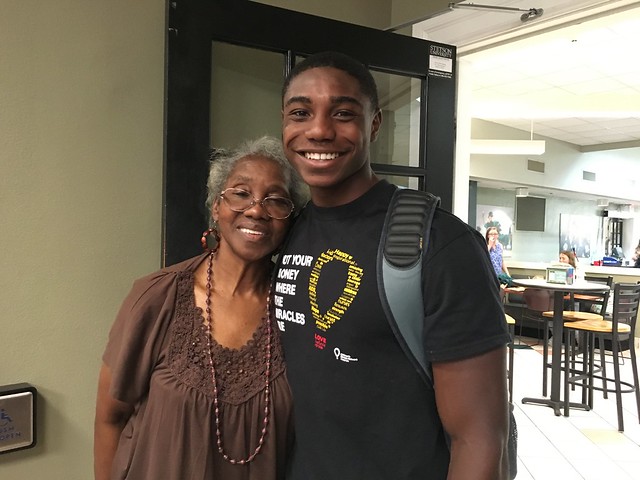 In November 1958, Irene Gilmore boarded a Greyhound bus in DeLeon Springs and headed to DeLand for her first day of work in the Stetson cafeteria.

Then 19, she started in the salad department in the kitchen of the Carlton Union Building, which at that time had been open for only a year.

In the 58 years since, she has worked in almost every facet of Stetson Dining – salad prep, cook, baker, chef, cooking instructor, caterer and now line server. She has fed three generations of Stetson students – ones who attended early in her career later sent their children and now their grandchildren to the university.

“I don’t want to leave, but health reasons and my age,” she explained on a recent morning as she walked from her car to the CUB, saying hello to people along the way and arriving early for her 8 a.m. shift. “I would like to work a little longer. … I’ve loved it.”

Her last day is set for Thursday, May 4, just before the kitchen closes for good at the end of Spring Semester, to make way for a larger, more modern kitchen in the $30 million renovation of the CUB. A retirement party will be held Tuesday, May 2, from 4:30 to 6:30 p.m. in the garden room of the Commons Dining Hall.

Many students and staff say they can’t imagine the dining hall without “Miss Irene” or “Miss I,” as she’s been called for years, even though she was once married and has a son.

Stetson senior Andrew Adams has known her since his freshman year. She has been a calming, comforting presence for him as they talk each day when he comes through the serving line for meals.

“When you’re feeling stressed out or anything at school, she comes in and reminds us that, ‘You’ve got this. You’ve come so far. Keep on going,’ “ said Adams, a Digital Arts major from Atlanta. “Personally, I look up to her … she’s a very great influence.”

During a recent shift, she stepped out from behind the serving line many times to give students or staff a quick hug and ask how they were doing.

“I’m a huggy person,” she said with a laugh. “People light up and smile and say, ‘You made my day.’

“I like to make people happy. You know, life can be so disappointing that I just like to be a light in somebody’s life. I encourage them. … You show love and you’ll receive love. You show respect and you’ll get respect.”

Barbara Stolz, senior director of Stetson Dining Services, has been on the job for three years and worked directly with Gilmore for a year. To her, Gilmore is “a gem” who will be missed when she retires.

“Miss Irene is definitely a favorite with the students. She knows many by name, is always checking to see how their day was, encouraging them, keeping them in check when it comes to eating healthy and cheering the athletic teams on,” Stolz said.

“In walking the dining room, I know I will always be greeted with a smile from Miss Irene, which is always a great start to anyone’s day. She is respected and looked up to by her co-workers and the management team. She has definitely been a gem to have as an associate and will be missed but never forgotten.”

Gilmore grew up in DeLeon Springs, about seven miles north of Stetson, one of six children born to field workers who picked oranges. She remembers riding the bus to the all-black Euclid High School in DeLand in the 1950s during segregation and passing by Stetson on Woodland Boulevard. Back then, before Presser Hall was built for the School of Music, passersby on Woodland could see straight to the fountain in Palm Court.

“Either way you came — north or south — you could spot that. That was an attraction at that time,” she recalled.

After graduating from high school, she took various jobs – babysitter, field worker picking ferns — before she heard from friends that Stetson was hiring in its cafeteria. She had always wanted to learn about food and decided to apply.

She walked on campus to the cafeteria office and spoke to the manager. She filled out paperwork and was told she would get her first paycheck in two weeks. If she remembers right, she earned $1.65 an hour.

Back then, she made the trip from DeLeon Springs to DeLand every day on Greyhound buses. She’d rise at 5 a.m., put on her white uniform and catch the 7 a.m. bus, arriving to work by 8.

“Stetson at that time was hiring a lot of people from all over,” she said. “I never thought I’d be getting a job here. You know how you pass a place and never think you will work there … so when I came, I stayed.”

Over the years, she befriended countless students, picking them up if their car broke down and left them stranded, taking them out for dinner or inviting them over for dinner at her house in DeLand.

Winifred B. Henry was 19 when she transferred to Stetson in 1982 from Edward Waters College in Jacksonville. A student worker at Stetson, she was assigned to work in the cafeteria.

“I became very drawn to her,” said Henry, who earned a Bachelor’s degree in elementary education in 1986 and went on to earn a master’s degree from National Louis University. “She was always very polite and asked what she could do to help and it just started from there.”

Sometimes, Henry would join other students at Gilmore’s house to play games in the evening and go to church with her on Sundays. If she couldn’t fall asleep at night, she would call Gilmore and they would go get something to eat at IHOP. 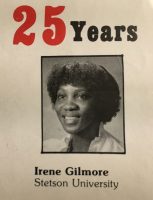 “She was like my mom away from home, and I’ve never called anyone that,” said Henry, a retired school teacher in Duval County, who now runs a nonprofit called Winnie’s Project H.O.P.E.

Henry recalled one time when her parents drove her to Stetson to attend summer school. She had money in her wallet to pay for school, but, after her parents left, she realized she had left her wallet in the car.

“I was so upset that night. Miss I came to the school and stayed with me until my parents drove all the way back and made sure I had what I needed. She waited until my mom and dad got back.”

Years later, Gilmore served in a similar role for Henry’s daughter, Jessica Henry, when she attended Stetson, graduating in 2012 with a degree in Accounting.

Added Winifred Henry about her college days, “There were times when I felt like I couldn’t make it and I wanted to quit. And she would say, ‘You are not a quitter.’ And she saw me through and I made it.”

Her son, Ray Gibson, said students and other people have always been drawn to his mother — a caring person who they could talk to easily. He went to work in the Stetson cafeteria at age 18 and worked with his mother there for 25 years.

“The only thing I can say is we have a lot of people who are going to miss her. She’s had an unbelievable run in that job because she has worked there in every place possible and she’s seen a lot of changes there.

“It’s going to be different without her,” he said.

Gilmore said it’s been a pleasure to encourage students, especially to get a good education because “that’s the only way you’re going to make it in this world.”

“I helped some students, and they came back and told me. Some of them give me Christmas cards. Some of the students come in and give me hugs, so that’s my reward.”