• The Daytona Beach News-Journal, Yahoo.com and other media outlets published the Nov. 14 article, “In Max Cleland, we lost an American hero who found inspiration at Stetson,” by Susan Ryan, dean of the Stetson duPont-Ball Library. She also is curator of the Max Cleland Collection. “With his passing Nov. 9 at age 79 — only three days before Veterans Day — that’s what Max Cleland left behind,” Ryan wrote. “A Stetson legacy.” 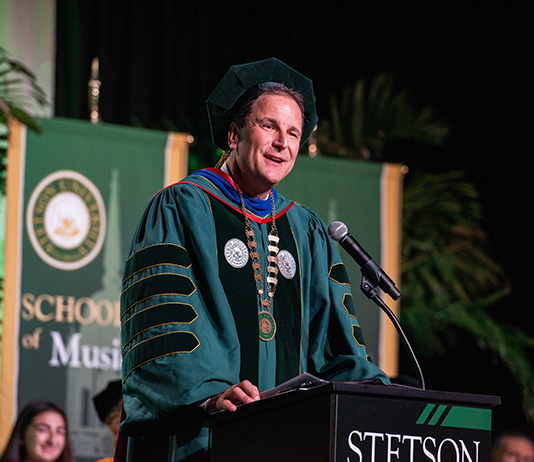 • The Champion of DeKalb County, Georgia, published, “Hail to the Chief,” a remembrance of alumnus Max Cleland on Nov. 22. The Gwinnett Daily Post, the Jackson Progress-Argus and other media outlets also published the column. The Waikato Times, Timaru Herald and other media outlets profiled the late alumnus Max Cleland in the Nov. 23 story, “Senator who lost limbs in Vietnam war, became subject of an infamous ‘attack ad.’ ”

• Rajni Shankar-Brown, PhD, professor and Jessie Ball duPont Endowed Chair of Social Justice Education, and Christopher Ferguson, PhD, professor of psychology, were quoted in The Daytona Beach News-Journal story, “Critical race theory: What is it and how did it become a political dividing line?” on Nov. 13. The story also was picked up by the Gainesville Sun and the Stuart News.

• The Atlanta Journal-Constitution quoted Professor of Psychology Chris Ferguson, PhD, in the Nov. 24 article, “Does social media impact our mental health, or is it a ‘people problem.’ ?”

• Reason published, “Eugene Huskey on the Soviet legacy in Central Asia,” in its December 2021 issue. Huskey, PhD, is professor emeritus of Political Science. The interview also was published by Conservative Angle.

• Scott Powers, PhD, distinguished scholar of health sciences, was interviewed for Doctor Health Radio about exercise and COVID-19 on Nov. 13.

• Alan Green, PhD, chair of the Economics Department and associate professor, was interviewed for a Spectrum News 13 story, “Volusia Mall attracts ten new tenants over the past year during the pandemic,” on Nov. 26.

• Stetson University was mentioned in the Nov. 19 story, “5 Best Food and Drink Trails in the Southern U.S.,” by Travelawaits.com.