In a reflective keynote address he delivered as part of the Stetson Law Student Bar Association’s Diversity Week events, Judge Timothy Walmsley spoke about diversity’s transformative role in the criminal justice system – and what it means to be a neighbor in 2022.

Walmsley serves as a Superior Court judge in Chatham County, Georgia, where, in the Savannah community, he “is regarded as a thoughtful and caring leader and friend,” said Stetson Law Professor Elizabeth Berenguer, who introduced him to the virtual audience.

Beyond his community, he is best known for presiding over the murder trial of the men who killed Ahmaud Arbery in 2020. In keeping with this year’s Diversity Week theme, “This is U.S.,” Walmsley spoke about diversity within the legal profession and how social justice informs his reasoning in cases like that of Arbery’s killers.

In preparing to speak Wednesday, March 2, he said he reviewed numbers featured in a 2020 American Bar Association model diversity study that examined legal entities’ diversity initiatives, hiring practices, attrition, promotions and more. While the statistics showed notable growth in the diversity within the Bar’s makeup over time, the diversity tends to bottleneck as one looks further up the chain of command at legal practices.

“Why that is occurring is a difficult question to answer,” Walmsley said.

“Conversations that need to continue”

Though he did not speak directly on his verdict in the Arbery case, he reflected on what it was like to preside over a high-profile case involving racial justice during a global pandemic. The case was outside his district, but he was appointed to it when all the judges in Glenn County, where the crime took place, had to recuse themselves. One of the defendants, Gregory McMichael, was chief investigator with the District Attorney’s Office there and was well known among the judges.

The case moved slowly, he said, because of COVID-19 related restrictions as well as the fact that he took it on while maintaining a full schedule in his own courtroom. He called for the courtroom to be open to the media. There were days when protesters demonstrated outside the courthouse and days when people like Rev. Jesse Jackson and Rev. Al Sharpton sat in on the proceedings.

Ultimately, he said he thinks it contributed to a bigger conversation about American justice.

“We learned a lot out of the Arbery case,” Walmsley said. “It was a high-profile case at a time when there had been a number of other high-profile cases that had been in the American conscience: George Floyd, Breonna Taylor, even the Rittenhouse case. All of those cases … along with the Arbery case, I think have opened up very positive discussions about the justice system, about how it operates, who’s operating it, and I think those are conversations that need to continue.”

What it means to be a neighbor

At the sentencing hearing for the defendants, Walmsley made headlines for remarking that the case “should force us to consider expanding our definition of what a neighbor may be and how we treat them.” His comments were based on comments of another Southern judge, and that he knew that during the hearing, his time to speak would be limited.

“I spent a great deal of time thinking through the sentence, and more importantly … because of the nature of the case itself, I really wanted to make sure that the public and the litigants understood my sentence. Judges don’t really have many opportunities to really speak their mind on certain subjects,” he said. “I stand by those comments.”

On the broader subject of fairness in the criminal justice system, Walmsley said there is a lot of work that needs to be done.

“A topic that we need to address is policing and profiling. There’s been a great deal of discussion on policing, in particular, and I think that discussion needs to continue,” he said. “We need to understand that there are real issues in policing, but there are also individuals out there that are working hard within the police departments to do things right.”

“You may feel like you’re not getting traction, but you are.”

As a judge, he added, his ability to issue sentences he views as fair is limited by factors, such as the Drug War, mandatory minimums and the jury selection process.

“We are challenged with a lot of problems when it comes to misdemeanors and petty crimes and how the accumulation of misdemeanor arrests and enforcement ultimately leads into my court, which is the Superior Court, where we deal with felonies,” he said.

Imparting optimism about the future

During the question-and answer session that followed, the judge was asked about what can appear to be slow progress when it comes to diversity and inclusion within the legal system. Walmsley assured his audience that the answer is to never give up.

“Nothing happens in the legal profession quickly,” he said. “You may feel like you’re not getting traction, but you are.”

The broad-ranging conversation took place during a week full of discussions about bias, discrimination and other barriers to diversity in the legal system and society. Now more than ever, organizers say, transcending differences is critical.

“In order to do business, in order to do anything in our society, we need to at the very least attempt to understand one another,” said Stetson College of Law Dean Michèle Alexandre, whose remarks kicked off the event. “The pursuit of knowledge, including our timely conversation today, is key not only for individual growth, but as professionals. It is essential for our ability to serve each other.” 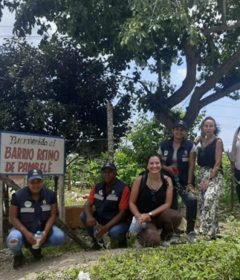