President Roellke urges Class of 2022 to keep growing, says Stetson will do the same 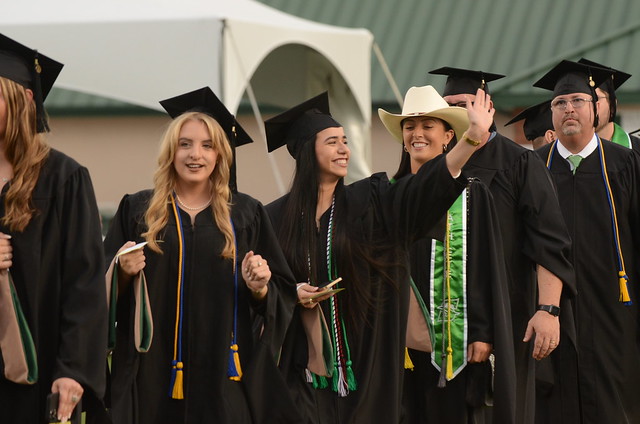 Graduates in the Class of 2022 survived not only the rigors of a Stetson education, but they also “succeeded in accomplishing something very difficult during a time of great adversity,” university President Christopher F. Roellke, PhD, said during Commencement on Saturday, May 7.

Stetson awarded bachelor’s and master’s degrees to 899 students for Spring 2022 Commencement. Following guidelines set by the university, three outdoor Commencement ceremonies held on Friday and Saturday, May 6-7, were the first in two years without COVID-19 safety protocols in place.

During his charge to graduates on Saturday morning, Roellke said the students had grown and changed during the challenges of the global pandemic. He urged them to keep pushing the boundaries of their comfort zone and promised that their “beloved Stetson University will do the same.”

• Focus resources on student learning, the first-year experience and improving pathways to graduation.

• Continue to grow the university’s endowment, which surpassed $400 million this year for the first time in school history. Stetson is enjoying its best fundraising year ever and is on target to raise more than $50 million this year in gifts, grants and pledges, exceeding the previous annual record of $28 million in 2018.

• Raising funds and working to transform the Edmunds Center, as well as improving historic Elizabeth Hall.

• Developing plans to convert Cummings Gym into a new center that will focus on Democracy and the Role of Higher Education in preserving and enhancing democracy.

• Supporting longstanding efforts to build a Performing Arts Center on Stetson’s DeLand campus to highlight the university’s outstanding students and faculty in music and the arts.

“These and so many other efforts will significantly enhance the value of the Stetson degree you will hold in your hand very shortly!” Roellke told the graduates.

Novak and Edmunds grew up on the Stetson campus while their father J. Ollie Edmunds Sr. served as the university’s fourth president. The two siblings have been longtime generous supporters of the institution, providing such things as scholarships, sponsoring university awards, and donating other gifts to the university.

An honorary doctorate also was awarded posthumously to Bailey, who helped to establish the Political Science Department at Stetson and served as a professor for 53 years before retiring in 2016. He passed away last year.

After receiving their degrees, graduates were welcomed into the community of Stetson alumni, who collectively serve as the institution’s greatest legacy 139 years after its founding, said Margo Thomas, executive director of the Office of Alumni Engagement and Annual Giving.

“You have made your mark here,” she told graduates, “and you have made us better. We all know that the pandemic college experience was not exactly what you had planned for. But despite the unforeseen obstacles, you persevered.

“You masked up, you Zoom’d in, and you made it. Wow. Phew. Ya’ll are already my heroes.”