Before Lee Sullivan ’24 even enrolled at Stetson, she knew she wanted to study abroad in Russia.

Her chance came Feb. 2, when she flew 40 hours to the Far Eastern city of Vladivostok, a Russian port city on the Pacific Ocean near China and North Korea.

She knew Russia was amassing troops near the border of Ukraine at the time. But she never thought Russian President Vladimir Putin would invade the neighboring country Feb. 24.

Within days, her study abroad company was preparing to evacuate its students from Russia, giving them the option to return home or relocate to a language school in Bishkek, Kyrgyzstan. Sullivan chose Kyrgyzstan, where she was pleased to discover breathtaking scenery, a slower-paced lifestyle and hospitable people.

While there, Sullivan learned that she received a prestigious Boren Award that will provide up to a $25,000 scholarship to cover the expenses of studying abroad. She plans to return to Bishkek for eight months next year and continue her Russian language studies during the Spring and Summer 2023 semesters.

She was one of two students of Russian at Stetson to receive Boren Awards in April. Alexis Laszlo, a student at Embry-Riddle Aeronautical University, received the award after taking Russian classes online through a partnership between Stetson and ERAU.

“We had two students receive this prestigious award,” said Snezhana Zheltoukhova, PhD, Stetson visiting assistant professor of Russian, World Languages & Cultures, who has taught Russian to the two students. “Both of them are star students.”

Sullivan, who is majoring in Russian, East European and Eurasian Studies at Stetson, applied for the Boren Award in hopes of studying abroad again and continuing her Russian studies.

“I decided that I could do another semester abroad and then add the summer on to it, studying Russian so that way I could hopefully be fluent in Russian by the time I graduated,” she said on a Microsoft Teams call from the London School of Languages and Culture at Bishkek.

In exchange for the scholarship, recipients of the Boren Award must agree to work for the U.S. government for one year. Sullivan hopes to work in Russian translation for a governmental agency.

“I’ve taken multiple cybersecurity classes at Stetson, and hopefully I’ll be able to continue my education after Stetson and get a higher degree in one of those topics,” she added. “I decided that the Russian language would be a great asset for the field of cybersecurity.”

Sullivan plans to travel to Armenia, Georgia and Latvia this summer and then return to Stetson for the Fall 2022 semester. She will live in a new Russian Community Catalyst House, designed for students who want to speak Russian inside the home.

“It’s the first time we’re opening [this Russian House],” Professor Zheltoukhova said. “She [Sullivan] will be there for one semester and then she goes back to Kyrgyzstan. I’m sure she’ll reach the superior level of Russian, which is an important achievement in this career.” 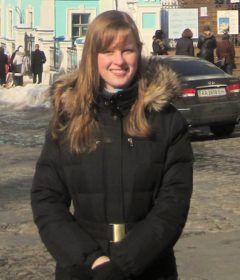