CASAG, or the Creative Arts Students Advisory Group, is an assembly of students from all four majors within the Creative Arts Department. One junior and one senior are nominated by the faculty from each department. The students meet a couple times during each semester to voice concerns, opinions, and issues raised by their fellow peers.

The goal of CASAG is to provide a working network of feedback to pass between students and faculty in the Creative Arts department. Advisory group members are purposely chosen for their interconnectedness at the university. The hope is that by reaching the most students, more communication will flow. Faculty members wish to understand what is important to Stetson students, and then respond to the thoughts and suggestions raised.

The group reports to Dr. Nathan Wolek, the department chair of Creative Arts. Dr. Wolek described the significance of the advisory board in his own words:

“As chair, CASAG has been an important way for me to hear directly from students about their biggest concerns. Also, sometimes faculty don’t have all the answers. At one of our earliest meetings, I was worried about prospective majors not seeing our various department spaces during the general campus tours. The students quickly volunteered their mobile phone numbers and just said “Call me. I would love to show an incoming student around if I’m not in class.” So Laura or I can now connect prospective majors directly with members of CASAG, and our students take a few minutes to show them the art studios or theater or computer labs. That was a very easy and direct solution that I know has made an impact.”

Originally from Venezuela, Geraldine is a junior Studio Art major, with a minor in both Psychology and Art History, She is the founder and a member of the new Kappa Pi International Art Honor Society, Alpha Tau chapter here at Stetson. Geraldine spends most of her days in her art studio, located in the Duncan Studios.

Ariana is a senior double major in Studio Art and Economics with a minor in Art History. She works at the Hand Art Center as a gallery assistant. Ariana divides her studio time between the Duncan painting studios and the advanced ceramics studios.

Simone is a junior Art History major. Most of her hobbies have to do with nature, like hiking in the Blue Springs State Park for example. She recently joined Hatter Harvest on campus to explore her interest in agriculture and nature as a whole.

Abbey is a senior Art History major and Spanish minor. She also volunteers at Stetson’s Center for Community Engagement and at La Casita Cultural Latina’s ESOL program. As an employee at the Hand Art Center on campus, Abbey will be curating the Spring 2018 Oscar Bluemner Exhibition at the museum. She has a dog named Jesmain with whom she enjoys walking around DeLand in her free time.

A DeLand native, Matt is a junior Digital Arts major with a focus on electronic music, earning a minor in Studio Art which he connects to his obsession with wheel throwing. Matt spent five years in the Army before coming to Stetson and is now in his third year here. When he’s not in the ceramic studio covered in clay, he can be found working at the Hand Art Center.

Dominique (a.k.a. Nikki) is a senior Digital Arts major with a Marketing minor who specializes in photography, graphic design, and video production. She is the lead designer for Hatter Network (Stetson’s student media organization), Athletics Communications assistant, and cashier at the New Smyrna Beach movie theater. She spends free time with her three cats while eating food, drinking coffee, and watching horror movies.

Usually found in the theatre building or at improv rehearsals, Katie is a junior Theatre Arts major and Education minor. She is also the president of the theatre honorary fraternity, Theta Alpha Phi, and the director of the Stetson Improv Players. Katie likes to spend her free time taking improv and stand-up comedy classes in Orlando at SAK Comedy Lab.

Aaron is a senior Theatre Arts major who specializes in lighting design. Usually, he can be found at the theatre working on the lighting system or helping run Theta Alpha Phi as its vice president, but when he’s not, he spends his time at work with the Event Setup Crew or at his apartment watching movies. 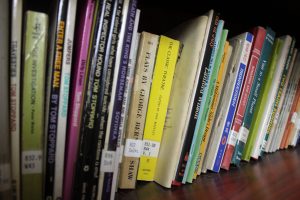 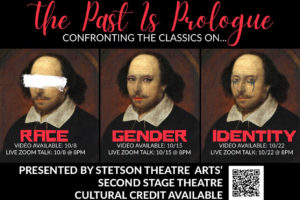 The Past is Prologue

Welcome to The Past is Prologue. This past year has felt unlike any other in so many ways.  When faced with the...