Last semester, Dr. Madison Creech’s Digital Arts 101 class was tasked with a project. For three students, it led to success beyond the classroom. Digital art created by Eva Deisa, Angelo Sarno, and Sydney Lee was selected to be featured as part of The Cube Art Project in Lincoln, Illinois.

Eva Deisa is an international student from Latvia and a student athlete on Stetson’s volleyball team. In regard to her major, Eva said “I didn’t know what I to do until the second semester of my freshman year”. Now she is a digital arts major. Last fall, she and her DIGA101 class had to create something surreal. “I thought, I’m going to do the most random thing that comes to mind and just go with it,” and she did.

Eva’s animation features a moonscape, a figure, and an armpit. “The character walks up to a giant armpit, tickles it, and just walks away,” she described. It is now playing in the exhibition, an honor that Eva “didn’t expect at all”. She said the acceptance gave her more confidence in her own abilities as a digital artist.

Angelo Sarno is a sophomore digital arts major from Port Orange. “I got the idea from my baby brother,” he said, noting that he’d observed his brother playing with his own shadow. He explained it as similar to Peter Pan’s shadow. Angelo’s work was created through the use of a green screen on campus. He had a friend record him as he moved and interacted with various objects. 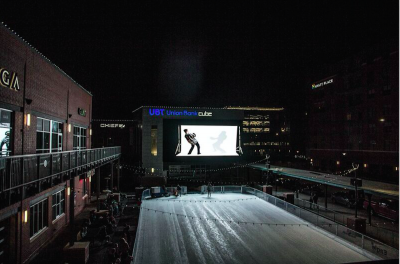 Now, Eva and Angelo are both working on a project to create a logo for Stetson’s Community Engagement program. Through the CE program, professors at Stetson spend time instructing inmates at the Tomoka Correctional Institution in Daytona. In Eva and Angelo’s class, each student creates their own design. Then “we are broken down into groups of four,” Eva explained. The design of one student from each group is chosen to continue. The incarcerated students will then choose the winning design.

Stetson students are not limited to their classroom, or to the campus. Their projects involve work on a grander skill, allowing them to see the impact their art can have.