Stetson University has had ten presidents since 1885. The Archives includes papers of the presidents, official correspondence, photos, and other memorabilia for each. 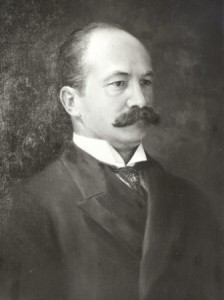 Henry DeLand, founder and president of DeLand Academy from 1883 to 1885, personally selected John F. Forbes to be the first president of DeLand College,which became John B. Stetson University in 1889. Forbes graduated from Rochester University and was a former professor at the State Normal school in Brockport, New York; he was 32 when he assumed the office of president. He received a starting salary of $2,000 a year plus room and board for himself and his family. Enrollment grew from 88 students to almost 300 during the Forbes tenure and a number of buildings were constructed, including Stetson Hall, Chaudoin Hall, Elizabeth Hall, Flagler Hall, and the residence of the President. Forbes oversaw the start of the first law school in Florida at Stetson in 1900. Forbes resigned in 1903 to enter private business. Although he left Stetson after his resignation, he was kept on the payroll until the Trustees officially accepted his resignation in 1904. Date of birth: June 13, 1853; date of death: March 30, 1926. 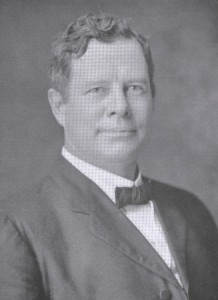 Lincoln Hulley had the longest tenure of any Stetson president to date. He guided the University through the difficult World War I and Depression years. Hulley graduated from Bucknell University in 1888 and went on to Harvard for post-graduate study. He received his Ph.D. from the University of Chicago in 1895. He returned to teach history at Bucknell and from there came to Stetson at age 39 to become president. Hulley
was considered a great orator and was a prolific author and playwright. He composed a number of original plays for production by Stetson theatre students. While serving as Stetson president, he also served two terms in the Florida State Senate starting in 1918. The student body grew to 500 during his time in office and accreditation was obtained from leading accrediting agencies. New buildings during the Hulley years included Stover Theatre, a Carnegie Library (now Sampson Hall), Conrad Hall, Cummings Gymnasium, Hulley Gymnasium, and the original Commons building (which later burned down over Christmas break 1954/1955). Lincoln Hulley died in office in 1934. Date of birth: May 3, 1865; date of death: January 20, 1934. 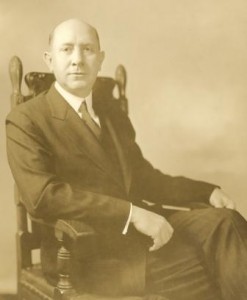 William Sims Allen graduated from Baylor University and earned advanced degrees from Columbia University. Allen returned to Baylor where he served as vice president and chairman of the school of education prior to coming to Stetson at age 46. Although Allen coped with the challenges of the Depression years and World War II, Stetson grew from a few hundred students to 2,000 during his time in office. In order to deal with the rapid growth, Allen initiated a program of expansion that included establishing separate schools for the disciplines of music and business. The physical campus also grew during this period and higher academic standards were put in place. The Allen inaugural address was carried over the first Florida statewide radio transmission. He resigned due to illness in September 1947. Date of birth: October 27, 1888; date of death: June 1, 1951. 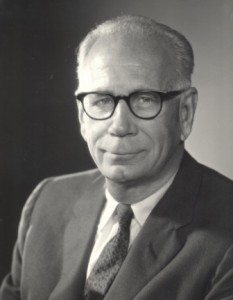 The first and only Stetson alumnus to become president to date, J. Ollie Edmunds was 46 when he became the fourth president of Stetson. Unlike his predecessors, Edmunds was not a professional educator; he was a former lawyer, Duval County judge, and businessman who had made an unsuccessful run for the U.S. Senate against Claude Pepper in 1944. Under Edmunds’ leadership, a planning and development office was started and modern fundraising techniques began. With the money raised, more than a dozen new buildings were constructed on campus, including the duPont-Ball Library, the Carlton Student Union Building, Allen Hall, Sage Hall, Davis Hall, along with several new dormitories. The College of Law was moved to its present Gulfport (St. Petersburg) site. J. Ollie Edmunds resigned in February 1967 to return to private business and was named the first Chancellor of the University by the Board of Trustees. Date of birth: March 1, 1903; date of death: April 2, 1984. 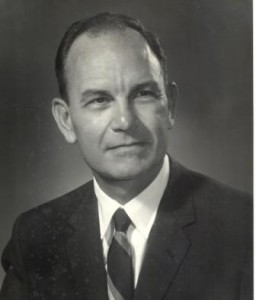 As a veteran foreign service officer, Paul F. Geren had a wide-ranging career in government, including service as an economic counselor at the American Embassy in Libya. He also helped to establish the Peace Corps and served as a deputy director of that organization. Geren was a former vice president of Baylor University and was 54 when he was appointed Stetson president. During his brief time as president, Geren initiated a successful foreign exchange program. He resigned from Stetson in 1969, but died in an automobile accident just days before his resignation was to take effect. Date of birth: December 5, 1913; date of death: June 22, 1969. 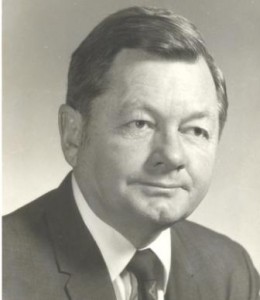 John E. Johns was the first Stetson administrative officer (Vice President for Finance and Planning) to become a Stetson president. After being named Acting President in 1969, he officially assumed the office in 1970 at the age of 49. Before that, he had spent a number of years as a Stetson history professor and as a Stetson business manager. Johns increased the endowment and operating funds, and during his tenure Edmunds Center was constructed and major improvements were made to the College of Law in Gulfport. Johns also strengthened the intercollegiate athletic program and the competency-based student teaching program. Johns resigned in 1976 to accept appointment as president of his alma mater, Furman University. Date of birth: November 15, 1921; date of death: September 27, 2007. 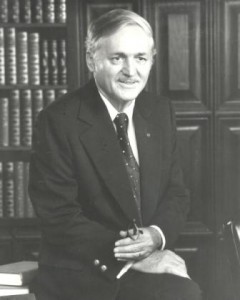 Pope Duncan devoted himself to Stetson for more than five decades, first as a professor of religion (1946-1948 and 1949-1953), then as president and chancellor. Duncan held degrees in both physics and theology and was an ordained minister who served several churches before moving into education. Before becoming president of Stetson at age 57, he served as president of both South Georgia College and Georgia Southern College. For a time while he was president of South Georgia College, he simultaneously held the position of dean at Brunswick College. As Stetson president, Duncan celebrated the University centennial and oversaw its selection for the first private university chapter of Phi Beta Kappa in Florida. He initiated a 10-year $50 million fundraising campaign, which was completed in six years. In 2002, Pope Duncan retired officially as chancellor; at that time the Board of Trustees named him Chancellor Emeritus of Stetson University. Date of birth: September 8, 1920; date of death: December 18, 2003. 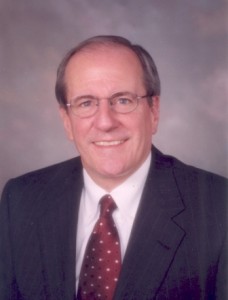 H. Douglas Lee graduated from the University of Richmond and received advanced degrees in Theology (Southeastern Seminary) and Religion and Ethics (University of Iowa). He spent time as an administrator and as a professor of religion at Virginia Intermont College, then moved into an administrative position at Wake Forest University. He came to Stetson in 1978 as the vice president for development and succeeded Pope Duncan as president in 1987. Under his leadership, various buildings were added to campus, including Griffith Hall, the Hollis Center, the Wilson Athletic Center, the Lynn Business Center,new dormitories, the Hand Art Center, McMahan Hall, and the Rinker Environmental Learning Center. Highlights of the Lee administration include the $200 million dollar fund campaign, the opening of the Stetson Celebration Center, the construction of Melching Field at Conrad Park (a state-of-the-art baseball stadium), the expansion and renovation of both the duPont-Ball Library and Sage Hall, the inauguration of the Institute for Christian Ethics and the Howard Thurman Program (established to integrate the works of scholars and community leaders to seek solutions to social, religious, and ethnic problems), and the creation of the University Values Council. Students often asked what the H in H. Douglas Lee stands for — and the answer is Howard. Lee retired in 2009 and was named chancellor of Stetson University. Shortly after his retirement, Doug Lee passed away unexpectedly from complications following surgery. Date of birth: March 15, 1943; date of death August 25, 2009. 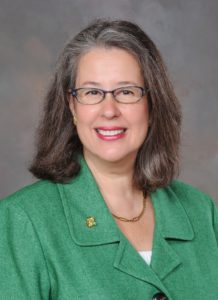 Additional photos of Wendy B. Libby.

Wendy B. Libby, Ph.D., became the ninth president of Stetson University, and its first female president, in July 2009. During her tenure, the university’s endowment more than doubled, and undergraduate enrollment grew by nearly 50%, to an all-time high of approximately 3,100 students; Stetson’s College of Law weathered a serious downtown in the national market emerging stronger while maintaining its #1 ranking in trial advocacy. Numerous academic programs were introduced, and the physical appearance of the campus rose to match the university’s overall enhanced stature. Stetson Football returned following a 57-year hiatus, and new women’s sports teams were added. The university also eclipsed its goal of $200 million for the Beyond Success – Significance Campaign (2012-2019), raising $218 million with Libby serving as the chief fundraiser. Donors helped to build new facilities, including the award-winning Rinker Welcome Center and refurbished and renovated Carlton Union Building, as well as the renovated Jeffrey and Diane Ginsburg Hillel House and the new Sandra Stetson Aquatic Center at Lake Beresford. Libby has been active in central Florida organizations, including as a member of the Mainstreet Community Bank Board of Directors. In 2019, she was named Higher Education Woman of the Year by the Daytona Beach News-Journal; the Orlando Business Journal named her Business Executive of the Year in 2014. Her leadership experience also included a three-year stint as Vice-Chair of the NCAA Division I Presidents Forum.

Prior to Stetson, Libby served as president (2003-2009) of Stephens College in Columbia, Missouri, the nation’s second-oldest women’s institution, and vice president for business affairs and chief financial officer at Furman University, Greenville, South Carolina, (1995-2003). Her administrative and teaching experience in higher education began in 1980 at institutions including Westbrook College (now part of the University of New England), the University of Hartford, the University of Connecticut Health Center, The Ohio State University and Cornell University. In 2016, she was placed on the “Wall of Distinction” at James Madison High School in Brooklyn, with the likes of U.S. Sen. Bernie Sanders and Supreme Court Justice Ruth Bader Ginsburg. Libby received the 2009 Outstanding Higher Education Professional Alumni Award at the University of Connecticut. A native of Brooklyn, N.Y., Libby earned her doctorate in educational administration from the University of Connecticut in 1994. Her undergraduate degree, in biology with a concentration in genetics, is from Cornell University, and she earned an M.B.A. with a concentration in finance from Cornell’s Johnson Graduate School of Management.

President Libby retired from the presidency of Stetson University in June 2020, at which time the Board of Trustees named her President Emerita and Professor Emerita. Date of birth: June 1, 1951. 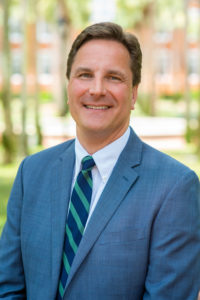 Christopher Roellke became Stetson University’s tenth president on July 1, 2020. He earned his BA in American government from Wesleyan University, and his MS and PhD in the social and philosophical foundations of education from Cornell University. Prior to entering the doctoral program at Cornell, he was an award-winning secondary school history and social studies teacher in rural, suburban and urban settings. In 2008, Roellke was appointed Dean of the College at Vassar. The Dean of the College provides leadership for a wide range of services, including academic and career advising, international study, accessibility and educational opportunity, multicultural services, campus activities, student employment, religious and spiritual life, campus dining, and campus safety and security. After completing two full terms of exemplary service, from 2008 to 2018, Roellke was named Dean of the College Emeritus at Vassar. Previously, Roellke has served as Dean of Studies, director of Academic Facilities Development, director of the Ford Scholars Program, and completed multiple terms as chair of the Department of Education. Since 1998, he has been engaged in several interdisciplinary initiatives at Vassar, including in urban studies, environmental studies and American studies.